We are well aware that in Slovenia, we are and will be dependent on imports. In the case of illiquid stock exchanges, we will not be able to cover consumption, which is why we also previously announced the possibility of reductions, for Diplomacy&Commerce, says M.Sc. Aleksander Mervar CEO of ELES and President of the ELES Group. From a technical point of view, Slovenia’s electricity system operates flawlessly, says Mr. Mervar. The war in Ukraine and the global energy crisis, including electric energy, are the topics that occupy the attention of the entire world. 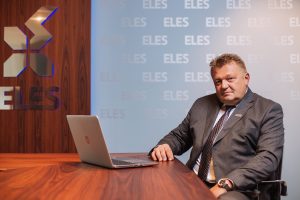 2. To what extent can prices on the global market change the situation, and how important is the common European policy in this case?
In our opinion, the EU is late when it comes to the measures which were announced at the European level. We do not advocate price restrictions across the board, and it is correct that prices are limited for households and small business customers. We are supporters of introducing a special tax on the extra profits of electricity producers who do not use gas in their production, and the funds from this tax should be distributed transparently through the appropriate methodology to the so-called non-household customers.
In Europe, everything will depend upon three things: the restart of all nuclear power plants in France, more precipitation and thus rising river levels and consequently higher production from hydroelectric power plants, and also the availability of gas from Russia for the needs of electricity generation from gas and co-generation of electricity from thermal energy for district heating systems. If expectations were to turn in a negative direction, we can expect reductions with simultaneous restrictions on the consumption of other consumers, for whom reductions would not apply. And, of course, extremely high prices for both gas and electricity. We also expect specific measures from the EU, mainly in that the extra profit of most electricity producers, which does not include production from gas units, is fairly distributed vertically to the final consumer. 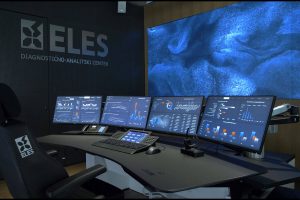 3. Innovations in your field of work are also very important. How much attention does Eles pay to innovations and in what way, including green energy?
In all its projects, ELES pursues the goals of decentralization of production, efficiency of use, electrification, selfsufficiency, the introduction of electricity storage devices, digitization, and resilience of supply. Pursuing any other goals would be irresponsible and contrary to the symbiosis of the environment and the expectations of a developed society. For all large projects, we try to obtain as many grants as possible so that the burden of the energy transition does not fall solely on Slovenians. We recently marked the end of the SINCRO.GRID project. In the framework of this project, the partners integrated the latest, already established technologies into the Slovenian and Croatian electricity systems in an innovative way – compensation devices, battery energy storage systems, and a system for determining operating limits. By 2030, with SINCRO.GRID we will be able to handle everything connected to the transmission network without any problems. It is the first successfully completed project in the field of smart grids, which was co-financed by the Connecting Europe funding instrument. In 2020, the International Smart Grids Action Network announced the recipients of the award for excellence in the field of innovation, integration, and transformation of smart grid systems (the ISGAN Award of Excellence). The topic of the call was digitalization on a global level, which enables the empowerment of consumers (Digitalization Enabling Consumer Empowerment). Among applicants from around the world, the Smart Grid and Smart Communities Demonstration Project (the NEDO Project) won the 2020 Best Project Award, while the FutureFlow Project was named the second best FutureFlow project in the world. For the first time in the history of these awards, a single company received as many as two. Innovations in the company ELES were also reported in the renowned magazine Forbes. In the article Renewables Won‘t Save Us If The Electric Grid Is Not Ready, the author David Blackmon points out how important for the future is the internationally awarded project FutureFlow, coordinated by the company ELES. Complex
energy flows require a lot of innovation and investment in infrastructure transformation. The challenges brought by renewable resources exceed the capacity of the infrastructure. The article‘s author states that the FutureFlow project‘s founders are aware of the challenges brought by the growing share of renewable resources. “They have developed a cloud-based trading solution that makes it easier for distributed producers to sell electricity, and such sales are based on demand. The system operator can regulate the grid more flexibly and take action if renewables cause problems. Solutions like FutureFlow will also be increasingly important in the US, as more and more commitments are made to strengthen renewable resources.”

In September 2019, we founded the Green Consortium with colleagues from GEN-I. Later, we were joined by Elektro Ljubljana, Elektro Celje, and Elektro Gorenjska. The primary goal was to jointly prepare a green transition/smart networks project, which we are trying to realize by obtaining grants from the EU CEF fund. We prepared the GreenSwitch project, valued at almost EUR 210 million. We first had to qualify the project for the list of PCI projects (Projects of Common Interest), which is a condition for applying it as a candidate for CEF funds during the next step. The GreenSwitch project, coordinated by ELES where we collaborate with partners from Slovenia, Austria, and Croatia, was rated as one of the best. This year, the project was included in the fifth list of joint European interest projects in the smart networks field.

4. What projects are in your plans and how will they improve the entire system and the quality of people’s lives?
The construction of the Cirkovce – Pince transmissio investment of ELES. The two-system 400 kV Cirkovce-Pince transmission line enables establishing a connection between Slovenia and the transmission network of Hungary, the only neighboring country with which Slovenia does not yet have high-voltage electricity connections. This year, we are finishing two international projects, which are 50% financed by grants and fall within the framework of the so-called investments in smart networks. It is the Slovenian-Japanese NEDO project and a project with partners from
Croatia – SINCRO.GRID. We are also finalizing a new, ten-year development plan for our transmission network for the period from 2023 to 2032. We estimate that we will invest over EUR 800 million during this period. In terms of value, the most extensive package of investments relates to investing in connecting transmission lines, cable lines, and the reconstruction of our regulation-transformer stations for connecting large fields of solar and wind power plants. The estimated value is EUR 138 million, and the implementation period is between 2023 and 2026.
In the coming years, we are planning many projects, albeit smaller projects in terms of value, mainly in new constructions and reconstructions of 110 kV transmission lines and regulation-transformation substations, prioritizing those that we have taken over from Slovenian distribution and production electricity companies for a fee based on the Energy Act. This year, the GreenSwitch project, coordinated by ELES, was included in the fifth list of projects of common European interest. It is an international project of consortium partners from Slovenia, Austria, and Croatia, with an estimated value of around EUR 210 million. With the GreenSwitch project, we will, by 2028, increase the control and management of power flow in the electricity transmission network and thus further strengthen the electricity networks. Our strategy is that for all large projects related to the so-called green transition, we are trying to obtain as many grants as possible from EU funds so that the burden of the energy transition does not fall only on the final consumers of electricity in Slovenia. In recent years, we have obtained over EUR 100 million in grants. 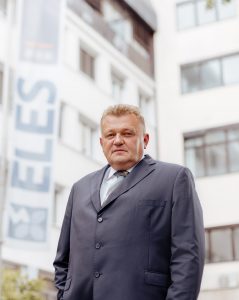 5. As a successful businessman at the head of an important company, how do you think the market in your field of work will develop in the future and where do you see ELES in 5 years?
As an assembly in February of last year, the Government of the Republic of Slovenia approved the ELES strategy until 2025. The document concerning ELES’ sustainability strategy looking ahead to 2050 was also added to the general strategy.

We defined seven main strategic directions:
1) Respect for the target values and the performance of employees in accordance with the Code of Ethics and corporate integrity guidelines, to achieve an appropriate level of business excellence;
2) Investments in the direction of the Sustainability Strategy;
3) Investment and maintenance activities based on the philosophy of the asset management system;
4) In addition to comprehensive control over the operation of the 400 and 220 kV transmission network, also assume comprehensive control over the entire looped 110 kV network in the Republic of Slovenia;
5) Lease of system services at comparable prices of neighboring Transmission System Operators and in view of new technologies, based on technical and economic criteria, a transition to the largest possible share of power provision from distributed sources (renewable energy production sources, battery systems);
6) Establish a stimulating environment for the retirement of the majority (90%) of those who have already or will fulfil the conditions for regular retirement by 2025, employment according to the principle of 2 retirements: 1 new employment;
7) Businesses within the regulatory framework, providing the owner with a profit according to the regulatory methodology