We want the widest possible involvement of citizens in this unique project where EU citizens, Member States, European and national institutions, various stakeholders in society think about what kind of EU we want to have and in which direction it should develop . Andreja Metelko-Zgombić, State Secretary of the Ministry of Foreign and European Affairs, talks for the summer double issue of Diplomacy & Commerce magazine about the Conference, cooperation with Slovenia and Italy in the North Adriatic, but also the enlargement policy in the Western Balkans and the European Union’s development priorities. 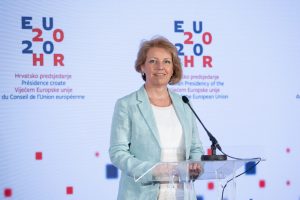 The Croatian presidency was certainly the first presidency to face a crisis of this magnitude, to which we should add the earthquake that hit Zagreb in March 2020. All of this inevitably required an adjustment of our program and plans, so we focused primarily on the coordinated response of the Council, which we chaired, to the crisis caused by the COVID-19 pandemic. At the same time, we did not lose sight of the priorities we had set for ourselves earlier, which we also largely achieved.

In order to respond to the pandemic effectively and in a coordinated manner, we have activated the European Integrated Political Crisis Response (IPCR) Mechanism, which has only been used several times so far, but never in this scope and duration; we coordinated a very complex repatriation process for EU citizens; we guided the work of the Council to enable the rapid adoption of two packages of urgent economic measures proposed by the European Commission in response to the crisis, which were of particular importance to the Member States, their citizens and the economy. We also had to look for some new solutions to allow the continuation of work and decision-making in the Council, which until then could only make formal decisions at physical meetings in Brussels and Luxembourg. In conditions where meetings in person became difficult or impossible, we initiated and agreed on temporary changes to the Council’s Rules of Procedure that allowed for written decisions, and the exchange of opinions and preparation of political decisions by convening videoconferences of Ministers – more than 60 of which were held during our presidency.

When it comes to our achievements, I would like to point out the reaching of a political agreement on the opening of negotiations with Albania and Northern Macedonia and holding the Zagreb Summit with the leaders of the European Union, Member States and the Western Balkans in video format, where the Zagreb Declaration was adopted. In addition, we adopted the Council’s mandate to start negotiations on launching the Conference on the Future of Europe, which is now in full swing, we debated a new EU budget and a new EU recovery instrument, which allowed for the basic instruments for the EU and Member States to be adopted as early as July 2020, immediately after the end of our presidency. We provided conditions for the orderly exit of the United Kingdom and Northern Ireland from the European Union and a mandate to conduct negotiations on future relations with that country. 33 EU legislative acts were harmonized, 54 Council decisions were adopted, we held more than 50 physical meetings of COREPER in Brussels. We are sorry that we had to cancel almost all physical events in Croatia, it would certainly be a good opportunity for additional presentation and promotion of Croatia.

I would say, therefore, that in the given circumstances, our presidency has been truly successful and that we have shown seriousness in dealing with the crisis, as well as the flexibility to find solutions to the challenges we faced.

Croatia fully supports the four main pillars of Slovenian presidency. When it comes to the recovery and strengthening of the Union’s resilience, in addition to the implementation of national recovery and resilience plans, we consider work in the fields of health, migration and the fight against cyber-attacks to be particularly important. We strongly support the strategic autonomy of the Union, the return of production to the Union throughout the Member States, especially when it comes to strategic products. In order to achieve ambitious goals within the green transition, Croatia will be a constructive partner in the negotiations and adoption of the legislative package (“Fit for 55”), which should enable the achievement of agreed goals, taking into account the national circumstances of member states. It is time for the EU to profile itself as a reliable partner in the region and the world. We are particularly pleased to see that the Slovenian Presidency is placing a focus on the enlargement policy, which should be credible, based on the own achievements of the countries involved in the process, and also plans to hold a summit of the leaders of EU and the Western Balkans, as proposed by the Zagreb Declaration adopted during our presidency. In addition, we expect the dialogue on the rule of law to continue, as well as a broad debate at the Conference on the Future of Europe. 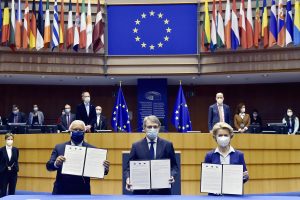 The Conference on the Future of Europe was one of the priorities of the Croatian Presidency, and the Council’s position adopted in June 2020 was the basis for starting negotiations with the European Commission and the European Parliament and agreeing on the mandate under which the Conference now takes place. We want the widest possible involvement of citizens in this unique project where EU citizens, Member States, European and national institutions, various stakeholders in society think about what kind of EU we want to have and in which direction it should develop.

I take part in the work of a task force established by the Croatian Government, chaired by the Minister of Foreign and European Affairs, within which we encourage departments to organize events and discussions – together with their partners from society and citizens, on topics of particular importance, such as climate change and the environment; health; stronger economy, social justice and jobs; digital transformation; values ​​and rights, rule of law, security; migration; education, culture, youth and sports; the role of the EU in the world; European democracy; and all other topics important to our citizens. Some of these activities are already underway, such as some youth gatherings or an event organized by the Office for Cooperation with NGOs – which I reported on at the first plenary session of the Conference. And we are planning a wider national event for the fall of this year. In support of these efforts, the Ministry of Foreign Affairs, held a public tender, through which they allocated funds and encouraged a large number of Croatian associations, about thirty of them, to contribute to the debate on the future of Europe with their activities with citizens.

We are especially pleased that the Vice President of the European Commission Šuica is in charge of this unique project and that the European Commission has launched a multilingual digital platform, a valuable tool for collecting, analyzing and publishing data and exchanging ideas. Croatian citizens, who can record events and present their ideas in Croatian, will surely give their contribution to this commendable project. 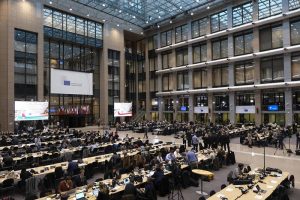 The joint trilateral statement is the result of an agreement between our three EU member states to step up the efforts to implement a range of measures in light of their shared responsibility for the Adriatic Sea, which should result in better transport links, more effective cooperation between our national economies and better protection of the Adriatic ecosystems. The proclamation of the Exclusive Economic Zone of the Republic of Croatia and the expected Italian proclamation of that belt in the Adriatic, creates an excellent basis for even stronger cooperation. When we talk about transport connections, we do not only mean better port connections through the North Adriatic Ports Association, but also infrastructural and intermodal connections, promotion of passenger and freight routes harmonized with sustainable modes of transport, such as railway traffic. In the field of blue economy, we want to contribute to the adoption of a new multi-annual plan for the protection of small oily fish and promote cooperation within ADRIATICA group or in projects such as the FAO AdriaMed project. When it comes to environmental protection, the plan is to modernize the Sub-regional Contingency Plan for Prevention of, Preparedness for and Response to Major Marine Pollution Incidents in the Adriatic Sea. None of the above can be effective without the dedicated cooperation of the three countries.

For Croatia, and especially for our Adriatic Sea, trilateral cooperation is extremely important. The Adriatic is the sea that we share and that connects us, we together have the desire and responsibility to protect it. The two meetings that our Minister Grlić Radman had with his colleagues di Maio and Logar were rounded off with joint statements that clearly outline the political will of the ministers to strengthen cooperation and gather bodies in charge of certain areas recognized as areas of special importance for all three countries – traffic connection, blue economy and environmental protection. Such cooperation is certainly in Croatia’s interest, and it also provides a good framework for the development of our economy, as well as overall relations with Italy and Slovenia.