In the period from October 30 this year to March 25, 2023, the national airline plans to connect Croatia with 13 international destinations with a total of 19 international routes. At the same time, it is planned to operate more than 8,500 regular flights and offer around 869,000 seats, which is 28 percent more flights and seats compared to the 2021/2022 winter flight schedule. 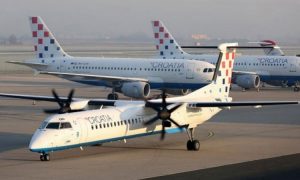 Accordingly, the national airline plans to make a strong contribution to the development of the Croatian tourist product and to the improvement of the transport infrastructure of the Republic of Croatia during the winter months.

New are direct international flights from Split – Zurich and Pula – Zurich. Planes will fly on both lines from the end of October this year. until mid-January 2023, twice a week – on Wednesdays and Saturdays, and return air tickets for flights from Split and Pula are available to passengers from 149 euros.

In order to respond to increased market demand, the airline is extending flights on the regular route Rijeka – Munich until mid-January 2023, on which aircraft will operate three times a week – on Tuesdays, Thursdays and Sundays.

Until the end of January 2023, flights on the regular route Zagreb – Dublin will be extended, on which planes will operate twice a week – on Thursdays and Sundays. Return air tickets on this line are available from 189 euros.

In addition, flights on the Osijek-Munich international route continue to connect eastern Croatia with the world year-round. Passengers still have two flights a week, on Mondays and Fridays, and return air tickets are available from 129 euros.

Flights are planned from Split airport to four international destinations, of which passengers have daily flights to Munich (return tickets available from 149 euros), Frankfurt (from 169 euros) and Rome (from 109 euros) and Zurich. twice a week.

In addition to the expansion of the international flight network, Croatia Airlines continues to ensure the air connectivity of Croatian cities and regions with its regular domestic flights, which includes flights between 5 Croatian airports (Zagreb, Split, Dubrovnik, Zadar, Pula).

The network of international and domestic flights during the upcoming winter season is adapted to market demand for air transport services, which is continuously monitored by the company, and the planned flight schedule is subject to change, depending on the development of the epidemiological and security situation in Croatia and the world.