Hungarian and Croatian minority policies are exemplary, and our economic and trade relations are constantly evolving

Following our joint efforts in fight against the COVID-19, and after the earthquakes in December 2020, a new bilateral cooperation emerged, namely humanitarian cooperation, H.E. Csaba Demcsák, Ambassador of Hungary to the Republic of Croatia says for Diplomacy&Commerce. Hungarian non-governmental and religious organizations offered help and gathered donations in a very short time for Croatian people in need. The Government of Hungary also reacted very quickly and decided to rebuild the school in Petrinja and restore the destroyed church of Žažina, says the Ambassador. 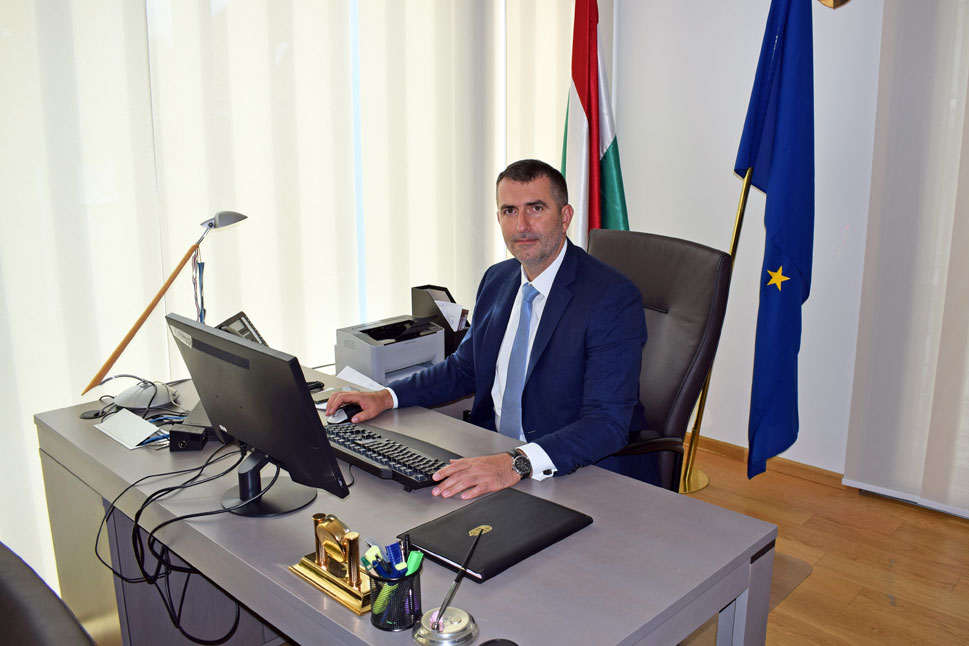 I am glad to say that the Hungarian-Croatian relations are excellent, as one would expect from a neighbouring country. Croatia is an important partner in the Central European region. We have a historical relationship, which was always fruitful and mutually profitable for both states over the centuries. We have every reason to look to the future with optimism. We intend to continue to work closely with Croatia in many areas. Hungarian and Croatian minority policies are exemplary, and our economic and trade relations are constantly evolving. I am keen to help investors of our countries to find business and trade opportunities on each other’s markets. On-going construction of cross border roads, as well as the opening of new border crossings, is important for people and entrepreneurs living and doing business on both sides of the border. With the aim of strengthening and boosting economic and human relations alongside the border, Hungary is a long lasting supporter of Croatia’s accession to the Schengen area.

I also see great perspective in cooperation in the field of tourism, sustainable development, water management and energy security.

With the objective to connect the region’s energy, transport and communications infrastructures, both of our countries are actively participating in the Three Seas Initiative. I think Hungary and Croatia can cooperate closely on the European scene as well: we support the accession of the Western Balkan countries and have similar views on managing the migration threatening Europe from the South-East.

Based on 800 years of close cohabitation of the Hungarian and Croatian nations, when it comes to culture, our Embassy intends to celebrate the anniversary of the birth of Miklós Zrínyi (Nikola Zrinski) with a large-scale outdoor concert in the renovated castle of Čakovec in May 2021. After the launching of the Hungarian lectureship at the University of Rijeka, we would like to extend our bilateral educational relations in the future.

As Hungary will hold the Presidency of the Visegrad Group from July 2021, we would like to organize several cultural and business events that would attract Croatian individuals and organizations as well.

In my opinion energy is the most important area for improving our relations. As every country, Hungary considers energy security to be of strategic importance. Hungarian-owned companies annually reserved more than 1 billion cubic meters of capacity in the Krk LNG terminal, therefore we cannot emphasize enough how important it is that the terminal launched its commercial operation on 1st of January, 2021. Another tool for energy security would be the integration of Hungarian-Croatian gas markets, based on our common interests. The combined size of our markets alone would make the purchasing conditions and gas prices more acceptable for our consumers. Moreover, the elimination of the border crossing natural gas tariffs would be beneficial for both sides.

The EU’s financial instruments, especially INTERREG, give a good background for the development of Hungarian-Croatian business relations and interconnections. I would like to underline the two projects that reflect how useful the cross-border cooperation can be for the people of our countries. First one is the bridge construction over the Mura River between Murakeresztúr and Kotoriba. The planning of the bridge has started in January 2020, and when the project would be completed, the bridge will contribute to the area’s business development. The other project that I would like to mention is the Beneficiary Light project, which supports the cooperation between the Hungarian and Croatian small- and medium sized companies, and their businesses. In the three calls so far, 22 projects were selected with a budget of almost €5.4 million.

In addition, I hope that our countries can also coordinate their infrastructural and regional development projects set in their National Operative Programmes.

As neighbouring countries, Hungary and Croatia foster vibrant trade and economic relations. In 2019, Croatia was the 2nd most important destination country for Hungarian capital, and in 2020 – despite the pandemic – our trade turnover exceeded 2 billion euros. Furthermore, last year Hungary was Croatia’s 4th most important trading partner with a 7.4% share in Croatia’s total trade, and Croatia accounted for 14.6% of Hungary’s total trade surplus.

Of course, there are always possibilities to enhance the cooperation. In my opinion, there is huge potential in the agricultural cooperation, and within that sector, in the production and joint appearance of Hungarian and Croatian GMO-free foods in third countries. Another potential area for cooperation could be the car manufacturing industry. The automotive industry in Hungary is the most important branch of the economy, which could mean a business opportunity for Croatian suppliers. Furthermore, the ZalaZone proving ground could mean a great opportunity for cooperation. As it is located close to the border with Croatia, ZalaZone is easily reachable to Croatian companies. It also provides a multi-level testing environment for R&D activities in the field of automotive development.

We hope that a mutually acceptable solution will be reached in the near future, and we can step forward and work together for the satisfaction of both our countries.

The Government of Hungary considers it particularly important to support the ethnic Hungarian minorities living outside the country’s borders to stay and live in their birthplace. To achieve this objective, in 2017, the Government of Hungary launched the Drávaszög Economic Development Program with the aim of supporting the SMEs active in Croatian counties where the majority of Hungarians live. The Ministry of Foreign Affairs and Trade of Hungary closely cooperates with the Economica Hungarica Foundation based in Osijek, which is responsible for its implementation on site. In 2020, the Economica Hungarica Foundation announced its applications for the fourth time. In 2020, despite the COVID-19 situation, four tenders were published, and a total of 2.1 million euros were paid to SMEs.

Yes, definitely. Tourism is an important branch of the Hungarian economy, although it is not as dominant as in the Croatian economy. I believe that the two countries could work together in providing services for tourists from third countries, especially from overseas or Asia. Croatia has one of the most beautiful coastlines in the world with a well-developed tourist infrastructure and road network. Hungary has a potential in thermal baths and health services. With the combination of our offers, we can attract tourists from all over the world.