On December 1, 2017 the Korea-Croatia Business Forum was successfully organized in Zagreb by the by the Croatian-Korean Business Club, the Embassy of the Republic of Korea in Croatia, KOTRA and the Korean Tourism Organization. This years forum was organized under the high auspices of the Ministry of Tourism of the Republic of Croatia together with the partners Lošinj Hotels & Villas, Qatar Airways, DMC Adriatic and Travel Lounge. Together with the hosts, the ambassador of the Republic of Korea to the Republic of Croatia H.E. Park Won-Sup and the president of the Croatian-Korean Business Club Mr. Zoran Horvat the ceremony was also attented by the Deputy Speaker of the Croatian Parliament academician Željko Reiner, Adviser to the President of the Republic of Croatia Mr. Luka Đurić, Assistant Minister of Tourism Mr. Robert Pende, director of the Zagreb Tourist Board Ms. Martina Bienenfeld, rector of the University of Zagreb professor Damir Boras, Mr. Mladen Vedriš, Mr. Stjepan Roglić, and 150 representatives of Croatian and Korean companies and institutions. 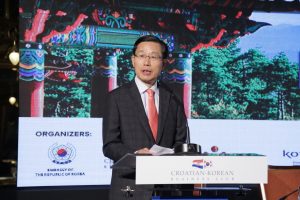 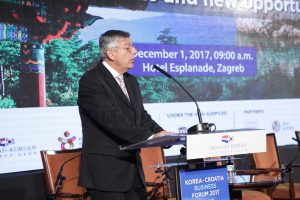 After the introductory speech Mr. Zoran Horvat president of the Croatian-Korean Business Club and the ambassador of the Republic of Korea H.E. Park Won-Sup welcomed all the guests and expressed his satisfaction with the Forum which aims to improve the economic cooperation between Korea and Croatia, which is one of the most important bilateral relations between these two countries. Assistant Minister of Tourism Robert Pende confirmed the importance of Forum organization which has caused great interest of the Croatian business community. Cooperation between Croatia and Korea has great potential and we believe that in the following years our economy will be even more connected, Pende said. The Deputy speaker of the Croatian Parliament academician Željko Reiner, pointed out the long standing friendship between Croatia and Korea which is growing every year. He emphasized the importance of developing relations between these two countries in all aspects of human activity, especially in the fields of science, culture and economy. 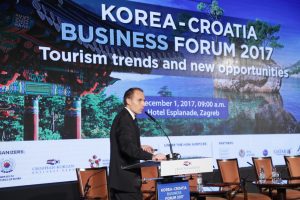 Key indicators in trade relations between Croatia and Korea were presented by the Secretary General of the Croatian-Korean Business Club Mr. Igor Zgrabljić. He presented the opportunities for Croatian exporting companies considering the structure of Korean imports which include most of the goods and services from the sectors in which Croatia is most competitive. He also presented the figures related to Korean investments in the EU and emphasized that the current situation is a great opportunity for Croatia in the upcoming period.

The Forum continued with the presentation of the representatives of the Agency for Investments and Competitiveness, the Croatian National Tourist Board, the Zagreb Tourist Board and representatives of the Korean Tourism Organization who presented the XXIII. Winter Olympics which will be held in 2018 in Pyeongchang, Korea. In the second part of the Forum more than 50 business meetings were organized between Croatian and Korean tourism companies. 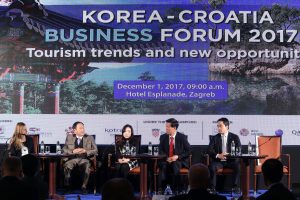