The LNG Croatia vessel which, as a Floating Storage Regasification Unit (FSRU), will be one of the main elements of an LNG terminal in Omisalj on Krk island, sailed into Rijeka Bay on Tuesday, the LNG Croatia company said. 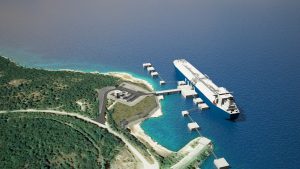 The vessel will dock at the Viktor Lenac shipyard in Rijeka for additional tests.

The LNG Croatia arrived from a shipyard near Shanghai, where it was converted into an FSRU.

The vessel will be put on trial at the LNG terminal in Omisalj on Krk island in early December and to commercial use as of January 1, the company’s director, Hrvoje Krhen, told Hina.

Twenty-eight people are currently aboard and it will employ 60 when it is put into operation.

The vessel was selected as the most cost-effective in a procurement procedure two years ago, when the Golar Power company offered to convert the Golar Viking LNG tanker, made in 2005, into a €159.6 million FSRU.

The floating LNG terminal will allow the docking of all LNG transport vessels with capacities ranging from 3,500 to 265,000 cubic metres.

The investment in the terminal amounts to €233.6 million, of which €101.4 million is a European Commission grant given that the terminal has been included on its list of projects of common interest.