A strong investment cycle of Telemach and United Group, of over one billion and seven hundred million kuna, aimed at modernizing the mobile network  and building a state-of-the-art optical network.

By building the fastest optical network in Europe  Telemach will place Croatia  high on the European digital map and ensure the highest level of service quality for its customers. Zagreb will become the first 10 Giga city in the region.

Already today, thanks to the existing infrastructure, Telemach can support internet speeds of up to 10 Giga in twelve thousand households in Zagreb, and by the end of next year in the entire area of ​​the City of Zagreb. In the next year, about 170,000 Croatian households will be covered by a 10 Giga optical network. The internet speeds that Telemach currently provides to its customers are as much as twenty times higher than the average internet speed in Croatia.

“Telemach came to Croatia to become a leader. We are an operator that fulfills its promises and we can proudly say that the 10 Giga optical network we are building will be convincingly the fastest in Europe, comparable in speed and quality only to the existing network in South Korea  which is a world record when it comes to internet speeds. Thanks to our investments in infrastructure, Zagreb will thus become the first 10 Giga city in the region, and the fastest optical network will soon be available to the whole of Croatia, “said Adrian Ježina, President of the Management Board of Telemach Croatia and Slovenia. 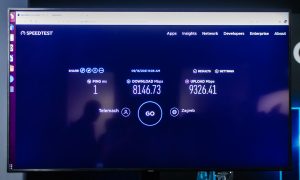 After integration into the Group and change of name, with the introduction of new mobile packages and the launch of an investment cycle of HRK 1.7 billion in the modernization of the mobile and construction of the optical network, Telemach is today the fastest growing operator in Croatia. Business growth is accompanied by a significant increase in the number of employees of as much as 59 percent in the last year and a half.

Simultaneously with the construction of the fastest fixed network, Telemach is working intensively on upgrading the existing 4G mobile network and introducing a 5G network so that all Telemach Croatia users will have the same level of mobile service in the next year. Thus, after the purchase of the frequency spectrum for almost HRK 110 million, Telemach successfully put into operation the first 5G base stations in Zagreb and Osijek, and the speeds measured on Telemach’s new 5G network reach up to 1.8 Gbps. Upon completion of the upgrade, the entire mobile network will be significantly improved, in line with the highest world standards.

“In less than a year, the 5G signal will be available throughout Croatia. Until the beginning of Advent, we will first cover the whole of Zagreb with a 5G network, followed by other larger cities. Already during the autumn, the residents of Novi Zagreb will be able to boast of the fastest internet speeds in Croatia, because the entire part of the city will be covered by a 5G mobile and 10 Giga optical network at the same time, “said Adrian Ježina.

Telemach in Croatia is currently building an intensive network modeled on Vivacom from Bulgaria and Telemach Slovenia, a member of the United Group with the fastest mobile network in its markets.

Ježina, who achieved an impressive career in Croatian telecommunications industry,  has also brought Telemach Slovenia to the level of the fastest growing mobile operator on the  market in just a few years, as well as etablished best user experience and best network.  Telemach Slovenia managed to position itself as the market leader from the third place thanks to a clear vision, introduction of new technologies and experienced Ježina.

Since March 2020, when it became part of the United Group, the leading provider of telecommunications and media services in Southeast Europe, Telemach Croatia has undergone an intensive business transformation with a clear focus on delivering the best products and user experience. With the already announced investments in the mobile network of an additional almost one billion kuna, which plans to significantly improve the coverage and capacity of the existing network, Telemach is currently upgrading the existing network based on the migration of technical systems as part of the separation process from Tele2 Swedan.

In order to ensure the best user experience in accordance with the wishes and needs of users, Telemach has enriched its offer by bringing to Croatia the leading OTT platform in Southeast Europe EON and one of the world’s leading music  services TIDAL