As a solidarity effort towards the town that was hit hard by an earthquake almost a year ago, Telemach donates 100,000 kuna to a Petrinja kindergarten. The donation will be aimed at equipping the expanded accommodation capacities within its extended part and creating conditions for quality educational work. 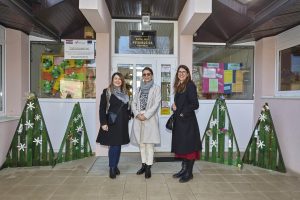 In anticipation of the holidays, Telemach continues to help earthquake-stricken Petrinja with the intention of contributing to creating conditions for its youngest residents.  Although the Petrinjčica Kindergarten suffered significant damage in the earthquake, it was successfully repaired with the help of donors by the beginning of the current pedagogical year, but despite this, a large number of unregistered children remained in regular enrollment due to lack of accommodation. Therefore, the donation in the amount of 100,000 kuna will be directed to equipping the newly built space for an additional five educational groups.

“Faced with the problem of insufficient accommodation capacities, we decided to go for a modular upgrade of the central kindergarten building, which will provide places for all unregistered children. In the current pedagogical year, there were as many as 49 of them who meet all the conditions for enrollment, and since every unregistered child means the potential departure of the whole family from Petrinja, we wanted to avoid such a scenario at all costs. I thank Telemach, to whom this is not the first donation directed to our city, and which we will use for the benefit of our youngest fellow citizens,” said the Mayor of Petrinja Magdalena Komes.

Commenting on the current needs related to the upgrade of the central city kindergarten, the director of DV Petrinjčica, Nataša Vidović, reminded that financial resources for upgrading and equipping the kindergarten are provided exclusively through donations, which is why any help is welcome.

“Telemach’s donation will be aimed at purchasing didactic equipment and furniture to equip the space under construction for five additional educational groups, so I thank Telemach whose financial support will greatly contribute to creating conditions for a quality educational process and enable our children to grow up happier.”, pointed out the director Vidović.

The donation of DV Petrinjčica is a continuation of the activities with which Telemach supports the earthquake-damaged Petrinja. Thus, after the donation of two drones to the Petrinja Public Fire Brigade in December 2020, Telemach continues this year to invest in projects aimed at the well-being of children and youth and will soon raise a balloon inside which will be a large sports hall.

“The recovery of the earthquake-stricken Petrinja is a long-term process that requires the continued support of the wider community in order to provide adequate conditions that will enable citizens of all ages to meet key living needs. In order to help rebuild the city and keep its inhabitants, especially families with children, we directed part of the funds to create the necessary conditions for the youngest Petrinja in the form of equipping the central kindergarten, while the new sports hall we will soon open to the city. but also the holding of numerous sports, cultural and social events.”, concluded the director of communications of Telemach Croatia, Sonja Miočić, reminding that the citizens of Petrinja have not had a sports hall for a full year, without which they were left in last year’s earthquake.