Expert round table “Cravat Diplomacy“ organized by Academia Cravatica and the Public Diplomacy Club of the Croatian Society for UN will be held in Zagreb on September 7th, in the House of Europe.

In the European Year of Cultural Heritage, the announced expert round table “Cravat Diplomacy” highligths the cravat as an intangible Croatian heritage, explores the role of the cravat in successful branding of Croatia in the world and opens up the question of worldwide positioning of Croatia, through the culture of wearing a tie. 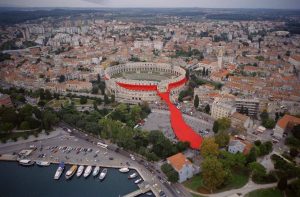 The forthcoming round table will be held under the auspices of the President of the Croatian Parliament, as well as the Ministry of Foreign Affairs and European Affairs and the City of Zagreb, in partnership with CROATA brand, Croatian National Tourist Board and the Tourist Board of the City of Zagreb. It will bring together prominent Croatian experts from the field of public diplomacy, experts on branding, international public relations experts and relevant representatives of state government, foreign policy, non-governmental sector, but also the cultural and tourism sector.

As a part of the round table, the importance and the role of the cravat in the branding of Croatia will be discussed by Goran Bandov, lawyer and politologist, associate professor and dean of the High School of International Relations and Diplomacy Dag Hammarskjöld, Zvonimir Frka Petešić, Ambassador and Head of the Office of the Prime Minister of the Republic of Croatia, also known as an expert in the area of ​​public diplomacy, Gordan Markotić, Ambassador and Advisor to the Deputy Prime Minister of the Government and Minister of Foreign Affairs and European Affairs, and Coordinator of the Presidency of the Republic of Croatia to the Council of Europe, Ms. Milada Privora, former Head of the State Protocol to the Republic of Croatia and Head of the Protocol of the President of the Republic of Croatia, prof. dr. sc. Mr. Božo Skoko, associate professor at the Faculty of Political Science of the University of Zagreb, expert in corporate communications and identity and image management, Mr. Darell Šarić, the leading brand marketing manager of the full service marketing agency Hipmedia, and Mr. Ivica Vidović, a well-known Croatian marketing expert; the discussion will be led by Nikola Albaneže, Head of Museum projects at Academia Cravatica, a renowned art historian and curator. 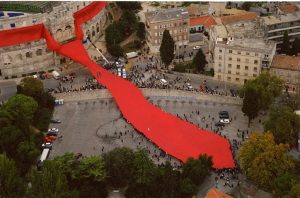 Marijan Bušić, head of Academia Cravatica announced the forthcoming expert round table, emphasizing its main purpose: “The goal of this event and our initiative is to enhance the representation and recognition of the Croatian cravat in the world. Namely, by the decision of the Croatian Parliament, the Cravat Day is celebrated on October 18th, and this year’s intent is to further expand this celebration worldwide, especially in Croatian embassies and consular offices. In this regard, we are trying to link all the Croatian institutions sharing the same goal as the organizers.“

“Many have already heard about sports diplomacy, especially the recent one with football, where we achieved a full hit. The term gastro diplomacy is also rather well known. Cravat Diplomacy is a new term and we wish to have it widely and convincingly recognized in the future”, stated Jelena Perleta, on behalf of the Public Diplomacy Club of the Croatian Society for UN.

Within the framework of the round table “Cravat Diplomacy”, Academia Cravatica will be appointing and presenting the first Croatian Cravat Ambassador. The “Cravat Diplomacy” expert round table also announces this year’s celebration of the World Cravat Day on October 18th and numerous activities that will be organised in Croatia as a part of the 2. Cravat Festival.