We want to promote Croatia’s complete wine heritage, its winemakers, wine and wine routes, nurture traditional values and initiate new forms of socializing. The abundance of wine offerings is a great asset of Croatia’s tourist offer and tourist potential, says Robert Bregant, President of Croatian Wine Roads for our magazine. 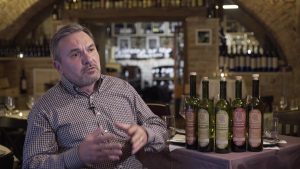 Almost all of Croatia, except the Lika and Gorski Kotar regions, is more or less covered in vineyards. Slowly but surely, wine tourism is finding its place in Croatia’s overall tourist offer, with the Croatian Wine Roads Association getting involved in this endeavour in its unique way.

The idea behind forming Croatian Wine Roads was born in late afternoon of July 3, 2016, while I was with my friend Zoran Rapajić (President of Serbian Wine Roads), drinking a glass of the Prokupac wine, made by winemaker Kosta Botunjc. One glass of wine will suffice for a good idea, but if you want to come up with an excellent, historically important idea, you need a few more glasses of top notch wine. And I had the latter! The idea sat with me for a while, just like good wine should, and then I started gathering enthusiasts who could and wanted to share their spare time with wine aficionados, wine makers and wine experts, but also to learn and try new flavours and combinations.

Two dates are exceptionally important for the Association. The first is August 18, 2016 when I gathered four friends and held the Founding Assembly of the Croatian Wine Roads Association.

Our experiences, in the two and a half years since we have founded the Association, are beyond great. All of the Association members are enthusiasts who possess good and noble virtues, and since the very beginning, they brought a lot of drive and panache to the Association. Today, I can say that we are a big, inseparable wine family. We are growing steadily. Together with our friends and wine lovers from Serbia and Slovenia we are experiencing unforgettable moments that people are already talking about.

There is no wine region in Croatia that still hasn’t recognized the potential of wine and has not included it in their tourist offer. Today, there are numerous wine roads in Croatia, which, in some regions, blend with cheese roads or olive oil roads. Most winemakers have added beautifully furnished tasting facilities and accommodation to their wine offer. Some also offer organized bicycle tours of wineries. All this is accompanied by numerous wine festivals and exhibitions such as Vinistra or Vinocoma. I also have to mention hundreds of wine associations that cultivate winemaking and which, like our association, are doing a lot on the promotion of wine and wine tourism both in Croatia and in the world.

The Romario d.o.o. Company, where I am the editor-in-chief, and the Jutarnji List daily have created and published a new and unique wine card of Croatia. Our intention was for everbody to become familiar with the immense winemaking abundance as much as possible. On December 3, 2018, the Jutarnji List published the wine card as a free supplement. This card is a realistic cross-section of everything wine-related.

4. Considering that this is a cross-border cooperation initiative, what is your cooperation with the regional neighbours like?

The cooperation was established from the very beginning and registration of the Association. On November 11,2016, we organized the first NovemberFest that hosted a large and impressive delegation from Serbian Wine Roads. During the three festival days, we presented the tradition and the customs of the city of Zagreb and its surroundings. We spent time together while enjoying beautiful wines and autochthonous dishes from Zagreb and Zelinski vineyards.

The most significant moments of the first NovemberFest happened at the Bornstein Wine Cellar in Kaptol. The presidents of the two associations – myself, on behalf of Croatian Wine Roads, and Mr. Zoran Rapajić, on behalf of Serbian Wine Roads – signed the Charter, the Friendship and Cooperation Treaty and the treaty on the founding of the Panonian Wine Corridor. The Panonian Wine Corridor epitomizes the continuation of our cooperation and will become the foundation for disseminating common wine-related ideas to other countries in the surroundings.

The Panonian Wine Corridor (abbrev. PWC) is an international project of linking wine associations, winegrowers, winemakers, wine cellar proprietors and all subjects who are in any way linked to wine and wine tourism. It connects all those who provide products and services for tourist purposes to the countries situated in the former Pannonian Sea, namely Bosnia and Herzegovina, the Czech Republic, Hungary, Austria, Croatia, Slovenia, Serbia, Romania, Slovakia and Ukraine. The PWC is a joint international project of Croatian Wine Roads (abbreviated CWR) and Serbian Wine Roads (abbreviated SWR). These two associations are the creators and implementers of the project. Also, they are the sole owners of the project copyright.

5. How can someone join the Association? How many members do you currently have?

The Association membership can be full-fledged (regular), temporary, affiliate, supporting and honorary. Any physical and legal person can become a member on condition that they have at least three references from our regular members and they successfully complete the process related to the temporary member status.

5. What is it that you offer to your members and what benefits do they stand to gain upon joining the Association?

Along with the standard rights and obligations that members have that stem from their active involvement in managing the Association’s operations, implementing its activities and supervising its work, the benefits, or as I would rather call them satisfaction, that the members stand to gain comes from cooperating with other associations from the PWC countries. We have several annual wine gatherings with these countries. These exclusive meetings involve sightseeing vinegrowing areas, presentation and tasting of wine and food, sightseeing of natural and cultural / historical sites and attractions, as well as wonderful thematic music gatherings in the evening.

8. What promotional activities are you planning for the upcoming period?

The first and most important project of the CWR Association in 2019 is organizing the 4th NovemberFest that requires a lot of effort and time. Our goal again is to present the City of Zagreb in the best possible light, fitting of a European capital city and the three-times bearer of the title „The Best Christmas Destination in Europe“.

The second project is the revival and expansion of the Wine Road of the City of Zagreb, which we plan to accomplish in cooperation with the City Office for Agriculture and Forestry and the University of Zagreb’s Faculty of Agriculture. Zagreb boasts having vineyards right in the metropolitan area, such as the Jazbina complex at the Faculty of Agriculture, but also the vineyard in the town centre – in Tkalčićeva Street.

Considering that Zagreb has experienced a fantastic tourist boom and that a large portion of the oenological-gastronomic offer is contained within the comprehensive wine card, I think it is necessary to revitalize and supplement the Wine Road in the city and offer it to the visitors as another very interesting tourist product.

The third project that we plan to implement this year is organizing at least two or three two-day educational and entertaining wine tours in the countries members of the Panonian Wine Corridor. We are going to start off with the Republic of Serbia and the Republic of Slovenia.

In order to implement the aforementioned projects this year, we really need financial resources. The only financial means that we have had so far were obtained through the Public Call for allocation of one-off grants, launched by the Mayor of the City of Zagreb, Milan Bandic. Therefore, I would like to appeal to all fans of wine and fellowship to join us personally and financially in the expansion of the cross-border cooperation and to become part of brilliant wine stories. 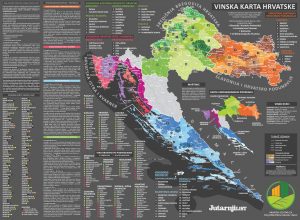