The 66th Split Summer Festival opened in the coastal city of Split on Tuesday night with the hoisting of the festival flag and a premiere of Verdi’s opera “I Lombardi”. 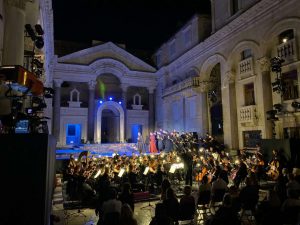 Opening the festival, Mayor Andro Krstulovic Opara said art did not stop because of challenges or crises and that the coronavirus crisis and everything that came with it had given numerous artists additional inspiration.

He said this year’s festival was opening with “I Lombardi” to “symbolically honour the suffering people of Lombardy and send a message of the power and invincibility of art and creation as well as the victory of us all.”

Culture Minister Nina Obuljen Korzinek said she was glad that another national festival was opening in different circumstances but by complying with epidemiological measures.

The programme has been adapted to the moment but the most important thing is that as many Croatian artists as possible work during the summer and that audiences enjoy culture in a safe environment, she added.

The event closes on August 14 with the presentation of the Judita awards and two concerts.