Slovenian flag-carrier Adria Airways has ‘temporarily’ suspended flight operations, the airline announced on late Monday evening. All flights for Tuesday and Wednesday have been cancelled, it is unclear what will happen to Adria Airways’ flights after this two-day suspension period. 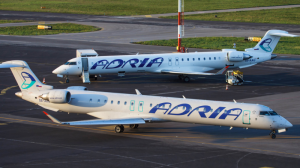 The airline says a lack of funds have forced it to take this decision. During the last few days, lessors have repossessed at least three aircraft of the Slovenian carrier. The lack of planes already led to some flight cancellations.

Talks regarding an investment to save Adria Airways’ operations had failed. The airline’s request for a rescue loan of reportedly four million Euros from the Slovenian government was denied.

Affected passengers that booked a flight with the carrier are advised to “contact sales offices where tickets were purchased“.

Adria Airways was operating short-haul flights using a fleet of thee Airbus A319 and a number of Bombardier CRJ regional jets. Additionally, five Saab 2000 turboprop aircraft are part of Adria, after previously flying for defunct subsidiary Adria Airways Switzerland. The 1961-founded airline employs a total of 558 people and is part of the Star Alliance since 2004. It carries more than one million passengers per year and uses Lufthansa’s frequent flyer program ‘Miles & More’.