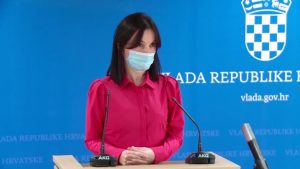 Minister Vucković participated in this, the first meeting of the EU agriculture consilium under Portugal’s presidency on Monday, where she informed her counterparts of the devastating earthquakes in Croatia and expressed the need for additional support measures within the framework of European instruments, the ministry said in a press release.

The Portuguese presidency kicked-off the meeting with a presentation of its priorities, including the conclusion of Common Agricultural Policy reform negotiations in May.

“Minister Vuckovic supported that approach and reiterated Croatia’s key priorities regarding the reform package – simplifying rules as much as possible, especially for small farmers; greater role by member states in defining agriculture measures within the common legal framework; continuing product related payments; taking note of specific needs of member states and improving measures to stabilise the market,” the ministry said.

The Croatian delegation pointed out the exceptionally negative impact of the earthquake on the timber sector, the rural community and farm activities as well as the devastation caused to basic infrastructure that has resulted in difficulties in accessing the market, reduced storage capacities and disruptions in the supply chain.

In addition to direct support, other support instruments are required to facilitate access to loans and financing, Croatia’s delegation pointed out.

“The Croatian government’s political and economic priority is to ensure assistance and a comprehensive revitalisation of jeopardised rural areas, and the ministry is providing all the help it can in its remit, including rescheduling the Rural Development Programme,” said Minister Vuckovic.

Thanking Europe for its help and solidarity so far, she underlined the need for “additional effort and expert support from the European Commission and for the activation of measures from the Common Agriculture Policy.”

That includes increasing the intensity of support for investments in this area to 70%, facilitating advance payments and abolishing bank guarantees as well as compensation for economic losses incurred by farmers in the earthquake area.

Vuckovic asked that “advance payments for direct support of 85% be paid before 16 October, for exemption of green fees and an extension of deadlines to complete investments from the rural development programme.”

Several member states expressed their empathy for the victims of the earthquake and supported the measures requested.