In an interview with Diplomacy and Commerce, Steven Meyer, former CIA deputy chief for the Balkans, talks about the current situation in region, as well as America’s influence in our region. 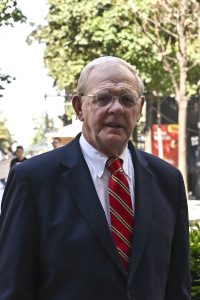 In the 1990s, we were here more, because of the war, and it was again mostly to collect information. We tried not to favor anyone’s side, because that made it easier for us to go to all three ethnic groups. That got a lot more difficult as time went on, to stay neutral.

2.Looking back, would you change anything regarding your work in the Balkans? What does it look like from your perspective today?

That’s a great question and yes, I think there are things that CIA and intelligence could have done better; collect better from all three sides. But the more difficult question is a question of policy. There were often strong disagreements between the State Department and CIA, and the White House also. The White House and State Department decided, at one point, that Bosnian Serbs were much stronger than the Muslim army and that we had to train and equip. That was a program – to make the Muslim army even with the Bosnian Serbs. CIA argued that two armies are equal, but the White House and State Department said no – “we still have to do more for the Muslims.” CIA argued very strongly that if we kept doing that, the Muslim army would become stronger and that would be an incentive for them to attack the Serbs, so the war would continue. That was one example of something that we felt we could have done better. There were several things along the way, but that was an important one.

Another important thing was the impact of the Dayton; an annex form which is the constitution of Bosnia, which was negotiated with Milošević, Izetbegović and Tudjman, but no Bosnian Serb representative. Nobody represented them except Milošević. Some of us were arguing that the objective was to create Bosnia as a multiethnic, democratic, free enterprise country, but when we analyzed the Dayton accord, we said that it would have the opposite effect, mainly you would structure two entities and they would have, by the constitution, a special relationship with their mother countries. CIA realized that if you create these entities and you say that Croatian entity can have a special relationship with Croatia, and the Serb entity can have a special relationship with Serbia, you are already establishing ethnic communities, and that was not what we were supposed to be doing according to the White House. We argued this but it was not accepted. As a matter of fact, Richard Holbrook became very angry when we reminded him that this would probably happen. The main point was that although many people here thought that the all departments in the US government had the same position, and that was not true. There were a lot of disagreements and a lot of anger and a lot of disappointments, and it was not just CIA. Sometimes, the Department of Defense would argue with us. So, it was train, equip and Dayton agreement. 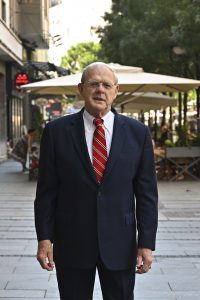 3.What is your assessment of the situation in Bosnia and Herzegovina?

What you have now is essentially a fictitious country, the country on paper. There is no national government since the last election. And that is because the national government is not that important, as the real power centers are in ethnic communities and the entities – especially the Serbs and the Muslims. Croats are a little different – they are a declining population and and they are much smaller and concentrated in Herzegovina. If you look around Banja Luka, what you have is all the trophies of the state, a large complex of the government buildings. The US embassy was very opposed to Dodik and Bosnian Serbs buildings. The US wants Bosnia to be the state. That’s not going to happen. The American policy has not been changed for 25 years. Everything around changes but not the US policy.

4.You have supported the demarcation plan for Kosovo. Is there a realistic chance for the plan to be implemented?

It is possible, it happened before, in Montenegro. That was something that the UN and the EU supported; they supported border change. The US is supporting the border change of Serbia. The US supported independent Kosovo and recognized its borders. That is a border change.  That is a violation of Helsinki final accord. But there are areas where they say no, and we are not going to recognize border change. When I gave a lecture at Banja Luka University, the students talked a lot about these issues, we talked about it, and I said why couldn’t there be a referendum. I asked three questions. Do you want to be a part of Bosnia? Do you want to be independent? Do you want to be a part of Serbia? There are problems with each of those. Being a part of Serbia would require Serbia to want it, but the Serb government doesn’t support that. They don’t support it because they are afraid of the western reaction.

I think that honest development, an honest solution would be, quite frankly, that everything north of the Ibar River belongs to Serbia. I know there are Serbs in the south and I am sorry and my heart is with them but it`s not going to come back. But there are enclaves, Serbian enclaves, in the south, holy places, churches, monasteries, Kosovo Polje… I think that agreement can be made that for this to be under the UN protection. If there is an agreement like that, and if there are Serbs, living south of the Ibar River who don’t want to live under the Kosovo government, then, I think, the UN should pay for them to be moved. This has happened before. I think that the key is to respect the ethnic identity for now. Maybe in 20 to 25 years, it may be different. But if they can come to some kind of agreement like that, then they can begin to work on economic issues.

5.Since all countries in the region have joined NATO, do you think Serbia should become a member too?

No. What’s the point?! When Croatia joined NATO, I was wondering for what purpose – who is going to attack Croatia and who is going to attack Serbia. Nobody is going to do that now. Even if it were to happen and if both countries were in NATO, and there was a conflict, NATO would not be able to pick a side. NATO has essentially outlived its usefulness. What does Croatia get from NATO? What does Albania get from NATO? All it means is that now the US can go to these countries and say we need soldiers to send to Afghanistan / Iraq.  You know when Albania was considering joining NATO, the defense minister at the time was a friend of mine, and I kept asking him, what possible reason would Albania have for joining NATO. Well, he said, it put them at the big table. But their seat would be in the back! All NATO does is add to the making of a new cold war, because it antagonizes Russia.