We all work towards the same goals: peace, prosperity, better life for the citizens, reinforced regional cooperation and accelerated Euro-integrations. The investment in stability and prosperity of the Western Balkan means investing in safety and future of the Union itself, for Diplomacy&Commerce says Zoran Zaev, Prime Minister of North Macedonia. 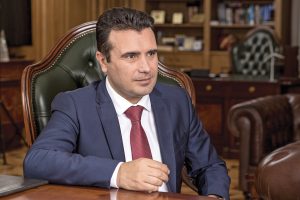 It is very important, on our joint path towards EU, to alleviate and to improve the lives of our citizens. In each country of the region individually, but also in the region as whole. To have infrastructure connectivity, to simplify the procedures, for example, of customs control. To promote the region as an investment whole for foreign investors. And here, I must mention the lowered roaming prices in our region – this is a great example for regional cooperation.

Two years from the work of the Government are behind us. We have left behind the deep political crisis using the necessary deep and serious reform processes in order to overcome the “captured society” and to reinstate the trust in the institutions, to restore the democratic environment.

The international community has recognized this, acknowledged our actions. It recognizes us as an equal partner, as a regional factor, in Europe and the world. This year we received the most positive report so far, as of the moment when we became a candidate country for membership; a report with clear and unconditioned recommendation for the European Union to commence the membership negotiations. The NATO Accession Protocol is in its final stage and we expect in December, on the London NATO Summit to become the official 30th member-state.

The economy is free, the entrepreneurs feel the positive tide of changes; they accepted the measures from the economic growth policies and the results are visible. Last year we had 737 million dollars in foreign direct investments compared to 205 million dollars from last year or, by 260% bigger compared to the average of the previous years. The labour market is significantly stirred. The unemployment is decreasing on fast rate. The State Statistical Office has announced that the unemployment in the first quarter is 17.8%. This means that the unemployment has been decreased by 4.8% in the last two years.

Bold decisions, courageous solutions are ahead of us, for additional benefits for all citizens – in the social area, in agriculture, regarding wages and measures from the operative plan for new jobs. Our next task in the following period is increase of wages. I believe that towards the end of the year we will have sufficient financial capacities to increase the pensions, starting as of January 1st next year.

To me, the highest criteria is how much their job is making a positive difference from the previous policies; Whether the performances of the institution that they manage have been improved, whether they work in the interest of the citizens. This is what I expect in the future period.

We must be sincere and admit that the fact that our country has been in EU’s waiting room for too long is not due to EU’s fault, but due to the previous government’s actions which in 11 year has not done anything to close the status of a candidate country with membership in the Union. The EU membership does not come as a gift. It must be earned. The merit comes after serious reforms conducted to achieve EU’s standards. This means that first we must Europeanize and there is nothing wrong with that. On the contrary: one must resolve all disputes with neighbours, EU does not want to “import” problems. That is why one must establish rule of law: EU does not want “enfant terrible” among its lines. EU is solidarity based, but it does not want countries which will bring the Union their own social unresolved issues, etc.

Therefore, the Western Balkan countries were offered the Berlin Process. A political process that complements the Euro-integration processes. It is a platform for European dialogue and cooperation; a platform that provides support to EU Enlargement Policy. It is a frame of mutual reconciliation of the Western Balkan countries using close regional cooperation and all in line of achieving economic growth and development, open market economy i.e. enhanced reform progress in the interest of accelerated EU integration.

The Republic of North Macedonia, instead of waiting the EU membership to fall from the sky as a gift, started working. Today, the country has no open disputes with any of its neighbours. EU welcomes the continuous progress in all key reform areas. They especially welcome the progress of the plan for enhancement of the neighbourly relations with a special emphasis on Prespa Agreement achieved with the Republic of Greece. We remain committed to the realization of the reforms in key areas such as the judiciary, intelligence and security services, fight against corruption and reforms in public administration. This is the choice done by the Republic of North Macedonia. This choice has no alternatives. The completion of these processes is just a matter of time.

The European Union is the strongest economy in the world. This is a market of 500 million consumers. Having equal approach and having equal benefits from that market bears great significance for the country. The investment in stability and prosperity of the Western Balkan means investing in safety and future of the Union itself. The Euro-integration processes will greatly impact the future generations. New possibilities will open for the young people: they will be free to study and work in any of the member-states. Our citizens will have all rights and obligations, as the other citizens of the EU.

This is a strong motivation for us, for the citizens, for our country. First, because we received a recognition for the great, historic decisions that we adopted in only two years as of the date when this Government took power, a recognition for the accomplished reforms, for the great role that our country has played in relaxing the situation in our region. For the period after taking power, we were given homework and we were told: Deliver and we will deliver!

Even without this, we knew that we must complete the reforms and implement the Prespa Agreement and the Agreement with Bulgaria. We delivered reforms and full cooperation. We showed that we are ready to make bold, historic decisions and to show political maturity and European manners.

Today we are ready, both politically and institutionally. We have fulfilled our tasks, from A to Z and we are fully ready to start negotiating. Now, the EU member-states and institutions should make their move. It is Europe’s turn to deliver. We strongly believe that we deserve the trust and the decision which EU will make based on our merits.

The delivery of clear attitude on the start of the negotiations process by opening the chapter is in the interest of the European Union; for the role of EU as a global player, for its foreign policy, for the future perspectives of the region. Opening of EU accession negotiations is the single guarantee for maintaining the domestic stability and the reform impulse in North Macedonia which will bring positive effects for the whole Western Balkan Region.

Yes, the most influential leaders of the international community have recognized it as a model for resolution of the most delicate and risky political issues. This agreement has shown that not all stereotypes are rule of thumb and that when these stereotypes are broken, it creates energy for new models of behaviour and for establishment of new friendships and relations between the countries and the politicians.

While we were looking for the best solution, we chose to leave solutions for our citizens and for our societies, not for us or for our political parties. These are the features of a European leader. Europe today is a result of bold decisions of the leaders who have left traces to remember on the political stage, traces which enable us to enjoy the fruits of their vision.

What would have Europe been today if the political stage is filled with only vain and self-sufficient, short-sighted politicians who have no vision? The good-neighbourly relations and the regional cooperation must be shared priority and strategic objective and we must go together, using our ambitions for EU integration. We must unite around the fact that the history is a significant part of our identities, but it must not take the place of our future. That is why it is important to turn to the future! 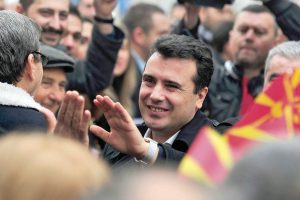 The small countries can hardly influence the policies and the decision making on global level. The only way to increase the impact is through integrations in supra-national organizations. By becoming a NATO and EU member state, following the principle “equal among the equals” and the principle of solidarity, we will have the opportunity to influence the equal decision making processes in these organizations.

Besides, one must not neglect the fact that the threats on the security and peace today are not the same as those in the times of Cold War. Especially with regards to the cyber space; there is no traditional declaration of war, there is no distinction between war and peace. One must take into consideration that the NATO membership, besides security and safety, means greater political, and thus, economic security.

The economic growth largely depends on the country’s capacity to secure sustainable peace and stability i.e. long-term security and political stability. The NATO membership provides greater security that improves the possibility of the country to secure political and economic stability. The EU membership shall mean entering a great and developed market thus increasing the perspectives for economic growth. This is a potential for new investments, for new jobs and reinforcement of the competitiveness of the domestic economy. NATO membership and EU accession accelerates the progress in the democratization of the society and good governance. These are the preconditions for faster growth and development; it creates conditions for enhancement of the standard of life and quality of life of the citizens.