Curricular reform should enable young people to acquire basic knowledge, literacy, social skills and ability to solve problems. Only this way can we find ourselves on the right side of ‘the iron curtain’ that divides the states into those that go with the digital transformation and those that lag behind.

Blaženka Divjak, the Minister of Education, acknowledges that there are many indicators that Croatia could be one of those countries that have failed to seriously understand the challenge of adapting to digital transformation and as a minister, she has been unremittingly propagating the importance of curricular reform. 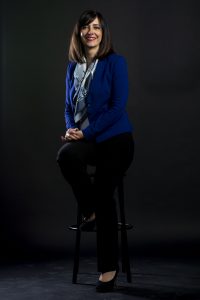 In the digital transformation of society, human capital becomes an increasingly important component that ensures entry into the group of developed countries. In that context, the education system reform and connecting scientific with business capacities becomes crucial for the strategic profiling of economies and growth, development and security of the individual and the community.

This interview came in the right moment to highlight the experiences that Croatia has had so far in applying the new curricula in 74 experimental schools, but also to talk about other important dimensions of changes in the education system that has to respond better to the needs of businesses. “Croatia is a small country with big human resources that can only survive if it strategically and wisely profiles itself in its immediate European environment, and makes smart use of the opportunities offered to it as the youngest member of the EU”, says Minister Divjak.

1. What are the first results of the experimental programme „Schools for Life“?

The first half-term of “School for Life” received very good ratings with clear recommendations for improvement. The collated data is based on anonymous surveys for teachers, students and associates, and on the reports from two counselling visits to schools and five regional meetings involving 2,058 teachers. The data indicate that 95 per cent of the survey participants are completely or mostly satisfied with the changes that the subject curricula bring. All the findings we have received from the surveys were immediately incorporated into the preparation for the implementation of curricular reform in all schools as of autumn this year. This became official after all 39 curricula were adopted and subsequently published in the Official Gazette.

With this, the curricula taught in gymnasiums, which are, incredibly so, over 25 years old, as well as the curricula taught in elementary school, which were modified 13 years ago, were made obsolete. I am particularly pleased with the fact that the history curriculum was unanimously adopted by the Working Group which has three new academic members and by the Expert Working Group. This is an excellent sign that Croatia can handle complex and sensitive topics through sound and content-based dialogue. I am proud of all people who have been working on the reform. I’m sure the changes we are implementing will mean that our students will have better chances to prepare for life and work. The satisfaction with the experimental programme is also validated by the fact that all 74 schools want to continue implementing the programme next year too.

2. The curricular reform has already come to life. What changes do you expect in the domain of automation and digitization and how applicable are they in practice?

Research shows that Croatia is at the risk of remain behind the wrong side of ‘the iron curtain’ which divides countries into those that go with the digital transformation and those that are lagging behind. Of course, pedagogy and methodology are the most important in education, followed by technology that helps with achieving results from learning and obtaining competences fitting for the 21st century. There is a doubt as to whether the digital transformation of the economy and society affects schools and higher education or whether schools are already influencing the transformation of the economy and society. Nevertheless, this is a two-way interaction.

Easy to learn facts are easy to digitize and computers are always better than humans in doing so. It is, therefore, necessary to change the paradigm of learning and teaching. Namely, a lot of old jobs will disappear in the future, and as a result of technological development, the jobs that entail innovation and creativity, as well as the jobs that are not routine jobs, both manual and cognitive, will thrive. We need to work on the computer-algorithmic approach to problem-solving, and on developing organizational and entrepreneurial skills.

We need basic knowledge, basic literacy and social skills, and ability to solve problems. That is precisely what we are focusing on in our curricular reform. This is also what is expected of curricular reform, but also of higher education and science reform, namely, boosting the relevance of education and science, which will contribute to social and economic development. The priority in schools in terms of digital transformation is digitally independent teachers, educated for the use of the equipment and digital content, and digitally independent students which are taught in accordance with pedagogical-methodological findings, meaning that digitization should be age-appropriate.

3. Which prerequisites need to be met in order to implement the reforms in the entire education system, at all levels, from pre-school to academic age?

Above all, readiness to change and face challenges. We should eliminate the unnecessary fear of change in teaching, so in our reform, we are focusing on creativity and autonomy of teachers in devising the teaching process, there are fewer tasks and teachers are given more freedom. It is important to empower teachers through a process of continuous education in which 40,000 teachers, associates and directors are currently participating. Teacher education is conducted continuously, both online and in person, and the reactions of all involved in the largest education process in the modern Republic of Croatia are very positive.

Of course, it is necessary to invest more in schools. Namely, in the last year, from December 2017 to December 2018, the Ministry of Science and Education has invested more than HRK 102 million from the state budget. At the beginning of this year, we were allocated an additional HRK 43 million for lab equipment, cabinets, art, technical culture, namely everything that is important to fulfil the prerequisites for the reform to enter well-equipped schools. Teachers and principals, who organize all of this, remain the most important factor and have to be as ready as the line Ministry. We have also contracted and implemented two projects related to the overall curricular reform in ESF worth HRK 155 million and HRK 684 million respectively. The total investments in the curricular reform from 2017 to 2020 amounted to about HRK 2 billion.

We have embarked on the School for Life tour in order to present in the person all the aspects of the reform and speak to almost 1,300 school principals. The reactions have been very positive. The Ministry of Science and Education is aware our colleagues at schools are investing additional effort into preparing everything for the realization of t new curricula and the use of new methods, and that they are working beyond their regular scope of work, in their free time. As a form of acknowledgement of this, we have provided rewards for them. This is the first step towards having a reward system for teachers which will be implemented via the new ordinances on promotion and reward that were written for the first time in the last 23 years and are about to be adopted.

4. How interested are today’s young generations in vocational occupations? Are there enough companies that can be included in the dual education system and offer quality work practice?

Ever since I was appointed minister, one of the goals that my team and I have had is reforming vocational education. It was extremely important to raise the attractiveness vocational education, which had been neglected for years, since it offers numerous opportunities for our students. One of the most important segments of this reform is forming regional competence centres where students have the opportunity to learn about the work they will have to do one day. More than a billion kuna of EU funds were provided for this purpose.

The second segment of this reform is dual education that gives our students the opportunity to work while studying and thus meet future employers. We have been talking about aligning education with the labour market needs for decades now, but only now we can see that certain concrete moves have been made. Hopefully, this will become noticeable in the next enrollment period. Our students must be trained for work and we have to give them all our help, as well as create conditions for that.

5. How much attention does the Ministry and the entire state sector dedicate to adjusting to international work and education programmes? How much do foreign schools and universities work in line with their own programmes? How can we move forward with this?

Creating and developing study programs is part of the university’s activities and competencies in higher education, both in Croatia and for the better part, in the world too. The idea is that the national and European development policies should direct the activities of higher education and science towards fulfilment of the three key missions of universities, namely the pursuit of scientific excellence and the development of the economy, the provision and continuous improvement of the quality of education, and universities fulfilling their role through their societal activities. In this respect, study programmes can fulfil all three university missions in different ways that are adapted to different education sectors.

For example, through the programme contracts that the Ministry has been concluding with higher public education institutions this year, investments in higher education are directed towards achieving agreed strategic goals, including the international relevance of study programmes measured by the number of international teachers and students studying at Croatian higher education institutions.

Furthermore, the other way that the state can act is to improve the regulations in order to overcome obstacles to the establishment of high-quality international partnerships in the launch and performance of joint studies and other forms of cross-border cooperation. With this in mind, the Ministry has drafted a law on the quality assurance of higher education and science, which contains such provisions.

Croatia is a small country with big human resources that can only survive if it strategically and wisely profiles itself in its immediate European environment. As the youngest EU member, it is given numerous opportunities that are yet to be utilized in the best way possible and this is where I see our chance for progress – modern approaches and technologies in higher education, systematic and sustainable partnerships and networking with reputable and respectable European universities, and strategic funding – this is the development path I see for Croatian higher education.