It is important that citizens understand that on May 26th they are actually deciding on the development direction of European policy in the coming years and that they should not just renounce their right to choose and let others choose for them, for Diplomacy&Commerce says Violeta Simeonova Staničić, Head of EP’s Office in Croatia.  The people we elect to the EP decide directly on the laws that govern our everyday lives.

For the third consecutive time, the Croatian citizens will vote in the election for the European Parliament on May 26th, during which they are going to elect 12 candidates from Croatia, one more than in the previous election, as a result of Brexit.

1. How much attention the European Parliament election is attracting in Croatia? What kind of voter turnout do you expect? The latest survey suggests that the turnout will be quite low, around 17%.

The election campaign is picking up pace, and we can see that candidates have been using different methods of attracting the attention of the voters. Personally, I would like to see more of a confrontation between programmes, ideas and plans. As far as the voter turnout is concerned, I hope it will be bigger than in previous elections when it was just over 25%. Croatia was in the group of countries with the lowest turnout. The figure you mentioned (17%) refers to the voters who, according to the latest Eurobarometer survey, said they would “likely” vote in the European elections. But, let’s not forget that the same survey has shown that an additional 16% of citizens said they would “probably” vote. So, we are talking about 33%, which would be – compared with 2014 – an 8% increase.

It is encouraging for us to see that citizens support EU membership and are aware that Croatia benefits from it. Another thing that was interesting to note in the Eurobarometer survey is that voters are much more critical of developments in Croatia than in the EU. Often people who are disappointed with politics or the system claim that their vote would not change anything. If everybody thought so, nobody would even take part in elections. So, it is important that citizens understand that on May 26th they are actually deciding on the development direction of European policy in the coming years and that they should not just renounce their right to choose and let others choose for them. The people we elect to the EP decide directly on the laws that govern our everyday lives such was the case with the GDPR, online copyright, ecologically clean cars and others.

As an institution, the European Parliament has been preparing for this election for months in a sense of motivating and informing citizens. The campaign called “I am Voting This Time”, which is being held in Croatia with the participation of over 26,000 citizens, is dedicated exactly to that. Young people who want to affect change and motivate their peers to vote are the biggest strength of this institutional campaign.

2. How does Brexit affect public opinion in the country and is the idea of European unity alive and well in Croatia?

In the last three years, Brexit negotiations have become one of the dominant topics in the European bloc. The debate about the United Kingdom’s exit from the EU has shown to what extent the EU members have become interconnected during all these years of joint work and the many benefits of membership in the bigger European club. These advantages sometimes become apparent only when faced with the possibility of their loss.

The decision on Brexit has also shown that the EU is not an irreversible project, but I do not think it negatively affects citizens’ relations with the EU, neither in Croatia nor in other member states. Moreover, the support for the European project is at a very high level. While we are on the topic of percentages and surveys, I would like to mention the Flash Eurobarometer indicators according to which more than two-thirds of Croatian citizens say that what connects us as Europeans is much more important than what divides us.

Therefore, the idea of European unity is very strong. It is also important to note that, during the Brexit negotiations, the EU has demonstrated and maintained unity and individual national interests failed to overshadow the common European interest. I think that most of the Union’s citizens are aware that, when faced with global challenges, Europeans have to work together. At the same time, the external pressure from third countries means that EU members need to be even more united if they want to maintain some influence and gravity in the new world order.

3. What priority topics the Croatian citizens want to see included in the European agenda and will their candidates in the current campaign honour their wishes?

Youth unemployment, economic growth, consumer protection, food safety and social policy are the main topics that citizens want to see their candidates tackle. These are the issues that should be incorporated into the political party programmes, i.e. dealt by the candidates that are running in these elections. The election results will show how successful they were at that. 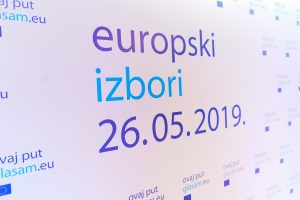 4. A total of 33 candidate lists were submitted for the European Parliament elections, which is 8 more than five years ago. What is the reason for candidates being more interested in these elections?

I do hope that their motivation is the true desire to participate in the important work carried out by the European Parliament. I would like to remind that, in the last five years, MPs have been discussing several hundred legislative proposals and have agreed to new rules that raise the quality of life of citizens in different ways. I will only outline a few examples – the Parliament’s work on equalizing the quality of the same products sold under the same brand in Western and Eastern European markets, cancelling roaming charges, and banning the use of disposable plastic products such as plates, cutlery and straws, in order to protect the sea and ocean health. The research shows that there will be more plastic in the seas and oceans than fish by 2050.

Regardless of where we live, what is our profession and how we spend our time, the EU affects our lives, and we are becoming more aware of that. I also want to point out that the European Parliament is committed to the fight for women’s equality too. The last in a series of examples that proves this is the MPs agreeing on a directive on balancing work and family life. The directive stipulates new rules that should facilitate the sharing of responsibility between women and men when it comes to child and family care. Among other things, the aim is to encourage men to take leave of absence for family reasons, in order to increase women’s participation in the labour market. Achieving equality continues to be a major challenge even in the most developed democracies that include EU members.

Despite the principle „equal pay for equal work for women and men“, we can see that the pay gap is decreasing very slowly. Women earn on average about 16% less for the same work than their male counterparts. Such a difference in practice later leads to significant differences in retirement, namely women’s pension can be as much as 36% lower than men’s. Women are also under-represented in managerial positions in companies, as members of boards of directors in companies and in politics. There aren’t enough women in the current convocation of the European Parliament and I hope that the upcoming European elections will change that. Croatia proved to be a good example, with women making the majority of the total quota of 11 seats in the parliament. We will see whether the same will happen in the new convocation of the European Parliament. 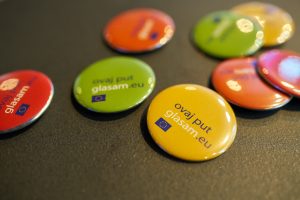 5. There are also two independent candidate lists in these elections. Does this mean that the Croatian citizens have decided to use this opportunity and thus signalize the Croatian political scene that they want something new?

It would not be right for the European Parliament to comment on the interior politics in Croatia. I would rather leave that to politicians and political analysts. But what sets this European election apart from the 2014 one is the fact that certain old alliances have been dissolved and that large parties are independently seeking the support of voters. As you know, in the European Parliament, politicians act through caucus representatives, regardless of their nationality.

In order to form a caucus, you would need at least 25 MPs from at least 7 different member states. It is important to know which club a party or candidate you vote for will ultimately join because the strength of the club also affects the distribution of functions in the working bodies of the Parliament, the allocation of time given to speakers, the number of rapporteurs for certain laws and so on. Therefore, I would like to call on the citizens who are going to vote in the May 26th elections to carefully choose a candidate or candidate programme, to pay attention to decisions and values their elected candidates represent in the European Parliament and with whom these elected representatives are going to cooperate in the implementation of their programme.

6.These are the third elections for the European Parliament in Croatia. Considering all the changes in legislation and greater experience, what has changed compared to the previous ones?

Globally speaking, the circumstances under which the elections are taking place have changed a lot. Brexit has created a lot of uncertainty, because, at this point, we still do not know the timeline or the scenario of the United Kingdom’s exit from the EU. After Brexit, the EP will have fewer MPs, but Croatia will be given one more seat. So, in some ways, Croatia’s gravity in the smaller EP will be higher. Generally speaking, many political parties are being rearranged which will have implications on the future composition of the European Parliament. The question is whether the traditional European political parties – such as the Socialists and people’s parties – will jointly win enough votes to form the majority in the new convocation, or will have to seek additional support through cooperation with the Liberals and the Greens. If the Eurosceptics and Populist Clubs grow stronger, we can expect that they will influence the legislative process and probably veto the decision-making process, which can have many implications on the functioning of EU institutions.