When someone is doing the easiest job in the world and still manages to make a commotion among the viewers in the region asking them if they were better before or now, why would they retire? Goran Milić wants to pack his bags and go to Cuba to ask the local citizens what will happen when the regime and the system change over there. 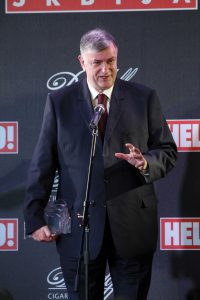 Since he moved 25 times by now in his life, Goran Milić, a veteran of Croatian journalism, is thinking that he might try living in the 26th place – in Split, as a good mix of cities where he lived lately. But before that, there are other places he would be willing to visit carried on the wings of journalistic curiosity. As an expert in questioning the past and the future in the Balkans, Milić is most probably most qualified to take a peek into the soul of those who wait for changes with hope and fear, in places that are yet to experience their transformation from socialism to capitalism.

Not only in so-called socialist, but also in many other countries of the world, people were divided into those who want to retire as soon as possible and those who want to work longer than the prescribed legal deadlines. Accelerated retirement made sense for miners, and even for some policemen, but not for journalists. However, since journalists had access to the media, this talk about “difficult lives of journalists”, “stressful job”, shorter lifespan, etc. was often presented to the public. Others didn’t understand why they are being forced to retire from state-owned media when they turn 65 and, eventually shifted to the second-rate status of a freelancer. Luckily for the profession, the idea of accelerated retirement didn’t pass and many journalists did their best work after they turned 60. Because, let’s be honest, journalism is a far easier job than digging trenches. If you are too old to go out to the field and to run after daily events, there is always the position of an experienced editor and mentor to younger staff.

Hahaha, this is how I described it by comparing experience from three countries where I filmed this series. In Croatia, life is better, but it is much more difficult than before. There is less safety, it is necessary to work more, often even two-three jobs. It’s much tenser and there is greater fear for the future of children and grandchildren than before. But, people have more real estate, they live in better houses and apartments, standard for summer vacation is higher, cars are better, a trip to Trieste is no longer necessary, that’s a fact. So, it’s better but more difficult.

In Bosnia Herzegovina, poet and wise man Abdulah Sidran defined the situation like this: Today is so bad that ANY TIME BEFORE WAS BETTER. And what’s worst, as time goes by, it will seem increasingly better in the extent in which we will be worse…”

In Serbia, I liked the story about a man from Vranje who went to see a fortune teller:

I recounted the event in the series because I think that the first 30 or so years of communism were difficult as well. Quite difficult. And then people got used to it, so today many people talk about the past times with nostalgia. Especially the Serbs, because with today’s uncertainty that comes with liberal and chaotic capitalism, Serbian people feel strong nostalgia for Yugoslavia.

The memory of recent wars and the Balkan syndrome where nobody wants to be a national minority hampers the progress. Life in a common state and similarity of languages we communicate with has contributed in the past to close ties and very often a sincere liking of the other nations in SFRY. But, since there is a small step between love and hate in the human nature, since people close to each other can love and hate each other much more than it would happen with unknown and distant cultures, we are now living this posttraumatic stage. There are numerous examples of mutual respect, friendly meetings, as though wars never happened, but sometimes, all it takes is a spark for rage and hostility to return. I lived in Strasbourg from 1953 to 1957, and I don’t remember any student in my school speaking German in public. And there were at least 20% Germans. Hassler, Burger, Heider, Knauff, I remember them to this day. Two civilized European nations found peace 20 -30 years after the terrible World War II, but things tend to do differently with us. In some other segments of life much faster than with Germans and the French, in other segments significantly slower…

If moving means relocation from one city to another for more than three – four months, then I moved 25 times in my life. That is why I cannot respond to this question with certainty. Zagreb is my home town, it has improved significantly since the 1987 Univerziade, it is very comfortable to live in, it has everything a person needs, and it’s not a megalopolis, it’s not too big for citizens to be bothered by traffic jams, lack of parking, great distances, social issues, the homeless, crime on the streets… Zagreb did not receive too many new citizens in this resettlement of the population all over ex-Yugoslavia, in average there is a surplus residential squares, but if you give in to hedonism just a little, you will realize that Zagreb is also an expensive city. I have a feeling, even though I don’t know if my guess is correct, that I would like to spend the last years of my life in Split. I never lived there, but it seems to me that Split is a result of all the cities I stayed for longer periods of time – Zagreb, Belgrade, London, New York, Montevideo, Sarajevo… It a smaller city, but it is beautiful, diverse, exciting…

Yes I do. I am now planning a trip to Cuba. I want to do a series of travel and documentary stories where I would speculate about what will happen once they change the regime and the system there. Will these people, who lived poorly for 60 years, but are used to security and modesty and have developed remarkable skills to beat the poverty, survive in new circumstances? When they work for three times higher salaries, but it might not be enough for fulfilment of piled up wishes. When the Cubans who escaped return and impose the “a la Miami” rules? Of course, I would always do that with associations to what happened to us, so the local viewers could understand all that better.

I don’t have great demands, I am satisfied with ordinary things. For example, for the first time in 48 years of work, I could afford a drive from Zagreb to Cavtat via Trieste. Autistic, by car, by myself… Two weeks in the Adriatic. I visit friends at the end of the season, I go to an unknown café, talk to people about big things and small. Without a cameraman, without a sound engineer. All by myself. And what annoys me? Our vanities. I think that half the problems in the Balkans came from uncontrolled vanity, and only half of them are financial. We cannot seem to understand that civilization is restraint from uncontrolled outburst of emotions.