As part of their European agenda, but also in accordance with their interests, in addition to the current crisis caused by COVID 19 pandemic, Croatia acts in order to resolve all open issues in the world and the region, stated Minister of Foreign and European Affairs Gordan Grlić-Radman for Diplomacy&Commerce magazine. Aside from Brussels, relations with Washington are also very important to Zagreb, which we talked about in the previous period, Minister Grlić-Radman adds. 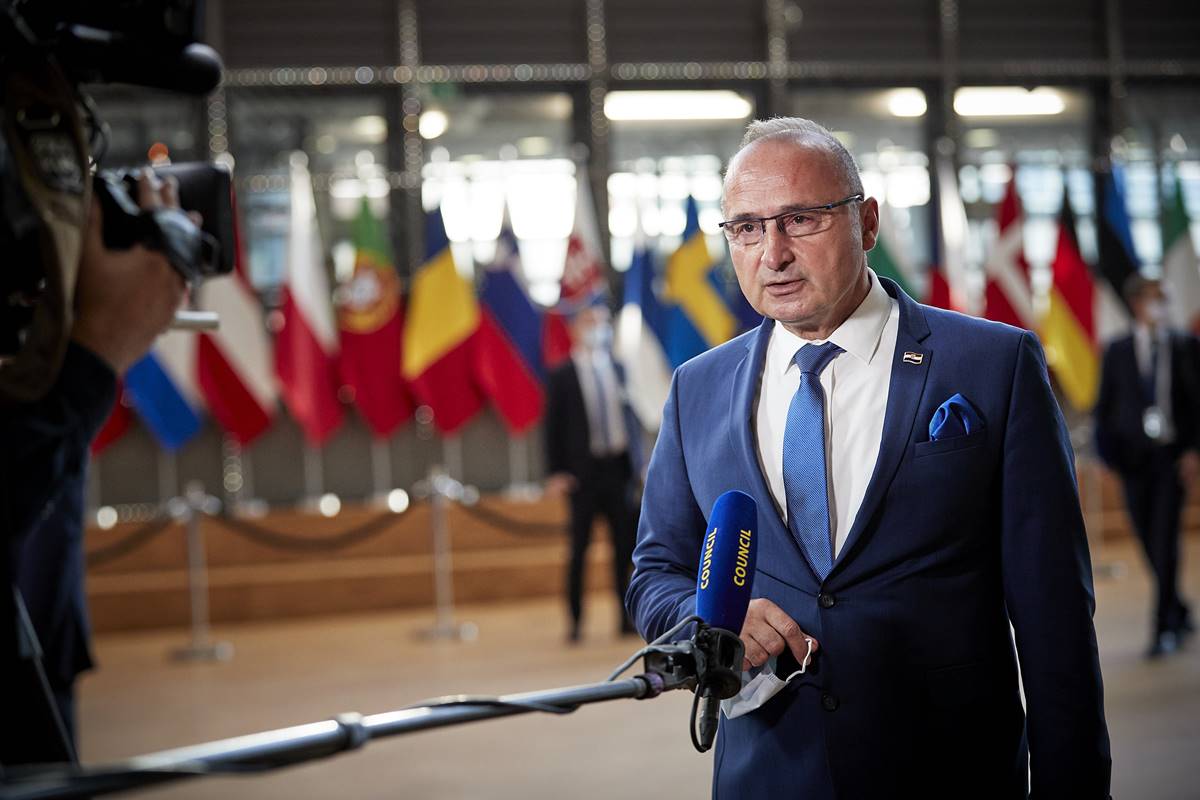 1. US Secretary of State Mike Pompeo visited Croatia. How do you rate his visit and how do you rate the current relations between Croatia and the USA?

Secretary Pompeo’s recent visit to Croatia confirmed the good strategic relations between our countries. Croatia and the US close partners and NATO allies. We are leading an open dialogue on a number of topics, from the Middle East, Southeast Europe and other regional issues to the global ones like the pandemic that hit us all.

I was glad to hear Secretary Pompeo stating that he sees Croatia as a factor of stability and a success story in Euro-Atlantic integration in Southeast Europe. We are a staunch proponent of the European and Euroatlantic integration processes. When the latter are based on the strong political will and fulfillment of the set criteria – as was the case for Croatia – they are the best way towards peace and stability in this region.

Croatia and the US have robust cooperation in a number of fields, notably in defense and security. I am very optimistic regarding the recent steps we made towards entering the US Visa Waiver Program for Croatian citizens and we are looking forward to final positive steps in that regards in the very near future. Let me mention that generations of Croatian immigrants played a significant role in building American society and today they represent a valuable bond between our peoples and countries.

Another important issue that we made substantial progress on is the Agreement for the Avoidance of Double Taxation. We started negotiations on the Treaty and, once concluded, it will play a significant role in attracting mutual investment, providing a major impetus for expanding Croatian-US economic cooperation. Cooperation in economy and energy is something we extensively talk about with Secretary Pompeo.

2. Topics for conversations were many, from avoiding double taxation, abolition of visas for Croatian citizens, purchase of aircraft to global issues, energy supply, 5G network. Which of the listed topics would you single out as the most important, and how close are the views when we talk about all the topics? What has been agreed?

All of the topics that you mentioned reflect the diversity of our cooperation, a diversity that strengthens the already-solid foundation on which Croatian-US relations are built. Very important topic is the situation in Southeast Europe. We exchanged views on the overall situation in the region. We acknowledged an important anniversary this year, the 25th anniversary of the Dayton Accords where the US had a leading role and of which Croatia is a signatory. We reiterated our well known position that progress in Bosnia and Herzegovina can only be attained if all three constitutive peoples are equal before the law and have legitimate political representatives in the country’s institutions. In terms of further efforts of the US in the SEE region, I’ve complimented the United States on its engagement in the normalization of relations between Serbia and Kosovo adding that this dialogue is important for the long-term stability and prosperity of the region. Secretary Pompeo congratulated Croatia on our EU Presidency and stated that the Zagreb Summit Declaration was a great success and another significant step in promoting need for comprehensive reforms and sustainable stability in the region. We both acknowledged the importance of opening accession talks with North Macedonia and Albania.

We are also glad that the floating LNG terminal entered the Rijeka harbor on October 13 and is currently undergoing testing in the Viktor Lenac shipyard. This marks an important milestone in the development of our energy sector and diversification of energy sources in Europe. It puts Croatia highly on the energy map of Europe.

3. How does Republic of Croatia see the situation tied to Middle East peace processes, then your visit to Israel and meetings with Israeli officials?

Croatia warmly welcomed the signing of the agreements between the United Arab Emirates and Israel, and between the Kingdom of Bahrain and Israel. We commend the role played by the United States in this regard and we believe that this leap will represent a positive contribution to peace and stability in the Middle East and globally. The UAE-Israel agreement entails a decision by Israel of moving from a policy of annexation to that of normalization, thus creating momentum to revitalize the Peace Process and opportunity for the EU to play a more significant role in the process, in order to facilitate our ultimate objective, a negotiated two-state solution.

Croatia advocates exploring ways of strengthening EU-Israeli relations, which is in the interest of all parties and the Peace Process as well. During my official visit to Israel i congratulated Israeli Officials on this historic achievement. Our bilateral relations with Israel are strengthening, minister Ashkenazi and I have agreed to raise them on higher level by signing a Memorandum of Understanding on Strategic Partnership between two ministries of foreign affairs. 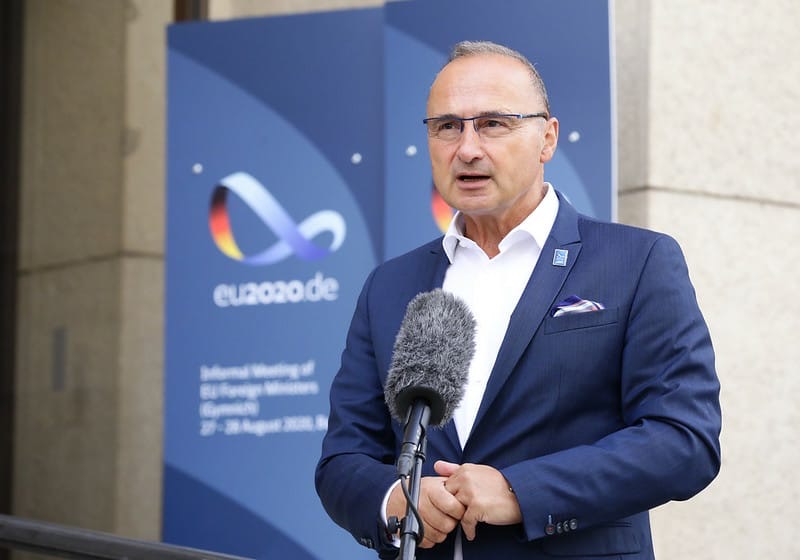 4. What is Republic of Croatia’s view of the situation in Belarus? Which measures should be taken?

Croatia is deeply concerned about the developments in Belarus, especially the recent escalation of violence, use of force against peaceful protesters, arbitrary detentions, and the use of blackmail against the political opposition. We have called on Belarusian authorities to respect fundamental freedoms, human rights and the rule of law, all of which are principles that are directly linked with the right of the Belarusian people to freely choose their own representatives. We supported imposing sanctions against 40 individuals involved in the acts of repression and intimidation against peaceful protestors.

Our position is clear: on short-term the violence and repression must end, detainees and political prisoners must be released, media freedom and civil society must be respected. However, an inclusive national dialogue is the only sustainable way out of the crisis.

5. What is the position of official Zagreb, which follows Brussels’ position regarding the current conflict between Azerbaijan and Armenia? What do you think how will this crisis unfold?

The initial clashes and skirmishes along the contact line in Nagorno-Karabakh have regrettably escalated into a full-blown conflict between Armenia and Azerbaijan, with wider repercussions for the whole region. Although we welcomed the two ceasefire agreements reached so far, we noticed with regret their fragility and disability to preclude further hostilities, and armed clashes leading to further casualties and damage to infrastructure. We urged both sides to stop the conflict and return to the negotiating table and called on all actors, including external parties, to refrain from any actions that may lead to further hostilities and casualties. Our full support goes to the negotiations facilitated by the Co-chairs of the OSCE Minsk Group towards a sustainable peaceful settlement.

6. The Nagorno-Karabakh conflict has been a frozen conflict for a number of years. There is another unresolved dispute in close vicinity to Croatia, in the region, which might become frozen. What is the official Zagreb’s position regarding the dialogue between Belgrade and Priština? And where and how do you see the resolution of this problem?

We discussed the Dialogue during the Foreign Affairs Council meeting last week. The EU Special Representative for the Belgrade-Pristina Dialogue and regional issues, Miroslav Lajčak, briefed us on the current state of affairs and other challenges related to the Dialogue. I expressed my support for the Special Representative’s efforts because reaching a comprehensive agreement on the normalization of relations between Kosovo and Serbia is of paramount importance for the countries involved, but also for the wider region. In addition to being comprehensive, this agreement should also be legally binding and sustainable in a manner that resolves all open issues and contributes to regional stability.

We do not see the existing status quo as a solution; it is currently – and has been for a long time – a destabilizing factor and an open fissure in European security. Here, I have to mention Bosnia and Herzegovina – 25 years have passed since the Dayton Accords, it is high time to seriously reflect on the situation inside the country. I therefore suggested to my fellow ministers at the latest FAC meeting that the agenda for our meeting in the near future include a discussion on the Western Balkans.

7. Bosnia and Herzegovina has special relevance, both political and emotional, when it comes to Croatia. Zagreb was recently individually visited by leading politicians from this country. The problem is the Constitutional Law and position of Croats as constituent peoples. How do you see the solution for this issue, and which direction will this issue take in the future? We know Zagreb’s position, but how will it act and in what direction?

In terms of our future course of action we will, of course, encourage and welcome processes that would prevent future unconstitutional gerrymandering through present Election Law. As an example, the Croats were three times in recent history (2006, 2010, 2018) denied of their legitimate representative in the three-member Presidency of Bosnia and Herzegovina, the collective head of state. The current member of the Presidency who should represent the Croats was elected into office not by votes of the Croat constituency which he should be representing, but by Bosniaks. This kind of inequality and discrimination causes tensions and instability on the political landscape and is a central cause of functional challenges Bosnia and Herzegovina faces today. Thus, it is paramount that the recent political Agreement between Mr. Čović and Mr. Izetbegović (leaders of the largest Croat and Bosniak parties) on the principles of the much-needed reform of the Electoral Law is respected and implemented without delay. Furthermore, in light of periodical interferences of third states in Bosnia and Herzegovina, the common goal of all true friends of Bosnia and Herzegovina should be to promote and encourage this Electoral Law reform which would immediately stabilize the political landscape and, together with other reforms, result in a well-functioning Bosnia and Herzegovina, firmly on the path to NATO and the EU – to stability, prosperity and security.