Croatia will have several priorities during its presidency, and each one of them is important on its own, Minister Grlić Radoman stated for Diplomacy&Commerce. Our goal, aside from the positioning of Croatia, is to protect European values, to development, connect, provide security and European influence, according to the Minister. 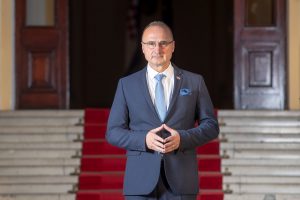 1. Croatia has prepared its 6-month program for its presidency, which rests on four pillars. Can you tell us a little bit more about each one of them?

We believe that strong and united Europe is the only answer to the challenges of today’s world. Hence, Croatia is preparing a presidency agenda based on four priorities under the motto “A strong Europe in the world of challenges”.

The first priority of the Croatian Presidency is “Europe that is developing” in a sustainable and inclusive way with promoting balanced regional development. We will also encourage consistent debate on demographic challenges, which is a problem affecting not only Croatia, but also many other Member States. The second priority is “Europe that connects” in terms of development of transport, energy and digital infrastructure. Here, we will encourage policies that strengthen infrastructural connectivity of the Union and bring together its peoples and citizens.

With the third priority, “Europe that protects”, we are determined to further establish the EU as an area of freedom, security and justice based on common values, democracy and the rule of law. Therefore, we will advocate for a coherent and comprehensive approach to external and internal aspects of migration – including legal migration. “An influential Europe” is the final priority where we intend to promote multilateralism and international development through European values and interests. We will organize an EU-Western Balkans Summit in May next year in Zagreb where we will advocate for a revitalization and strengthening of the EU prospects for Southeast Europe. 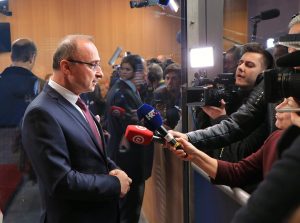 2. What are the greatest challenges during the presidency?

Croatia’s Presidency comes at a time of great changes in the EU, at the beginning of a new institutional and legislative cycle and the negotiation of a new multiannual financial framework. Challenges are many:  agreement on MFF still needs to be reached as well as the agreement on future relations with the United Kingdom, starting discussions on the Future of Europe through the Conference – to name just a few. The new European Commission presented important new initiatives – such as the European Green Deal, and it is important to move forward with discussion on these topics.

During Croatia’s EU presidency, a conference on Europe’s future should be launched. Its purpose is to bring the EU closer to citizens and consolidate its democratic legitimacy. Let me remind you that Ms Dubravka Šuica is the Vice-President of the European Commission and is responsible for demographic issues and organizing this important conference. In preparing our Presidency, we were motivated by the desire to bring Europe closer to its citizens. The Conference on the Future of Europe gives us opportunity to find ways how to better respond to their expectations. Very soon, the three institutions will be defining the mandate of the Conference, and Croatia will be representing the position of the Council of the EU on that process, which should be open, inclusive and focused on policies, challenges and opportunities, that will be shaping the future of Europe in the medium and long term.

The coming months are crucial for reaching an agreement on the multiannual financial framework (MFF) for 2021-2027. The main part of the job is now in the hands of the European Council and its resident Charles Michel, who is in charge of reaching a compromise on the MFF. In cooperation with the President of the European Council, we will strive to facilitate an ambitious, comprehensive and balanced agreement on the MFF. The idea and the intent is to make a budgetary framework that would be both realistic and efficient enough to meet all the needs and priorities of the EU and its citizens, which is why we believe that cohesion and agricultural policies need to be retained, and new challenges addressed. Our priority as a Presidency is also to work on the sectorial legislation once the agreement of MFF is reached.

I want to mention the Zagreb EU-Western Balkans Summit in May. We want to bring together all the heads of states from the EU and countries in Southeastern Europe to accomplish concrete results and give a message of encouragement to our neighbours. 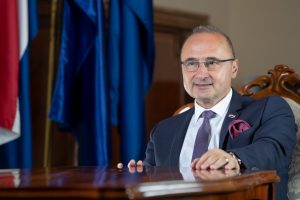 3. How do you comment on today’s foreign political challenges that come with the process of United Kingdom’s withdrawal from the European Union? Do they affect your agenda and how?

We see the decision of the United Kingdom to leave the European Union as a turning point in the history of the European Union, and it’s a decision that Croatia deeply regrets, but fully respects. At the same time, Croatia welcomes the fact that, as a result of immense effort on both sides, the Withdrawal Agreement was negotiated. In partnership with the other Member States and institutions of the European Union, Croatia will carefully monitor its implementation. As the country holding the Council presidency, we will do all we can for the EU to adopt guidelines for negotiations on future relations as early as the end of February.

We see the UK’s departure from the EU as a new beginning in our relationship. Both as the Council Presidency and bilaterally, Croatia remains determined to invest its efforts to keep the United Kingdom as our close partner.

4. Bearing in mind the fact that enlargement is one of your priorities, do you expect any significant changes here at the May Summit in Zagreb? What do you think how will the new suggested EC methodology affect the outcome of the Summit?

During the EU presidency, we believe it is important to dynamise relations between our neighbours and the European Union. Therefore, we will organize an EU-Western Balkans Summit in May in Zagreb. This summit becomes even more important because we have to define what we want in the next decade – the method, the pace, the political messages we wish to send to those countries.

Croatia will continue to advocate for strengthening of the EU perspective for Southeastern Europe, based on fulfilment of criteria for membership. The purpose is also to show aspirants that the EU will help them in the process. During our Presidency we will strive for a continued credible and consistent enlargement policy, as an investment in the stability and security of the European continent and strengthening the EU’s leading role in the neighbourhood.

When it comes to this newly proposed methodology of accession negotiations, we believe it is a good step forward in further evolution of the negotiating process, taking equally into account the interests of all sides, candidate countries and EU Member States alike. We are glad this new proposal is fully compatible with the goals of our Zagreb summit – particularly with regard to the proposal to organize regular high-level dialogue and deeper analysis in key moments of accession processes. We find especially important the proposal for enhancing the predictability of the process through good planning and setting clear conditions. These conditions will be strict, but also objective, precise and verifiable at any given moment. We believe that this new methodology, together with the new European Commission’s assessment of the reform efforts of Albania and North Macedonia, shall enable the European Council to reach a decision in March on the opening of accession negotiations with these two countries. 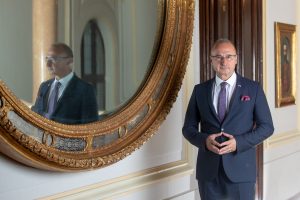 5. What does the presidency of EU Council represent for Croatia, and what can be expected from Croatia during its presidency?

For Croatia, the EU is an unprecedented peace project and a community that gains its strength from common values and solidarity. Croatia’s presidency of the EU is a historic moment and an opportunity to make a contribution and add impetus at the start of a new institutional and legislative cycle in the Union.

We want an economically strong Europe to strengthen our countries as well, including Croatia, and make our citizens’ status better. We want stronger European infrastructure, better human potential, better security for our citizens and we want to make the Union a leader on the global scene based on the values we share.

The role of the EU Presidency is very dear to us, not only because it means leading the Council’s work, but most importantly because it also represents the success of Croatia’s own European path. From a country that suffered war and aggression, we managed to recover, reform and develop to the point that we take leadership of the EU Council. This makes us particularly proud. Being for the first time at the helm of the EU will be an opportunity for Croatia to shape jointly with our partners, as Croatia’s Prime Minister Andrej Plenković said, “a more agile, coherent and outward looking European Union”, fit to proactively tackle all the challenges ahead.

6. What are your expectations for the future of relations with Slovenia?

The Court of Justice of the EU has no jurisdiction to rule on the action brought by Slovenia against Croatia over alleged infringements of European law, and it has stated what we claimed from the beginning – the dispute between Croatia and Slovenia is a dispute within the realm of international law, not EU law.

Croatia is not called upon in this ruling to implement the arbitration agreement, nor can Slovenia resolve this matter on its own.  Therefore, this judgment is a strong message to Slovenia that it cannot achieve anything by unilateral moves. We are reiterating the invitation to Slovenia to resume bilateral talks in search of a final solution to the border issue, which objectively is not far away, but I admit is challenging. You see, this dispute on the borderline should not burden people, either Croatians or Slovenians living in the border area. Therefore, we continue to invite Slovenia to find a solution bilaterally through negotiations in line with international law. We are confident that after this ruling of the Court in Luxembourg, the two countries can open dialogue in search of a solution to the demarcation of the land and sea border.

We want to send a message that we are mature and friendly states and nations, members of EU and NATO, and that the existing problem is not of such a magnitude that it should have burdened our relations for all these years