The French-Croatian Chamber of Commerce and Industry by the traditional celebration of the third Thursday in November, with the famous exclamation Le Beaujolais Nouveau est arrivé! (The young Beaujolais arrived!) marked the opening of this year’s bottle of the best young wine in the world. 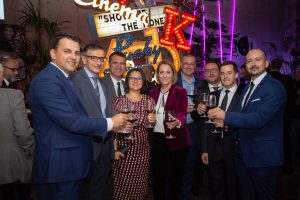 In the great atmosphere of the Kaptol Boutique Cinema & WOW Bar in Zagreb, the opening of the first Beaujolais Nouveau was hosted by over 300 guests, business associates and guests invited by members of the Chamber of Commerce to celebrate this day, and the usual hosts at the end of the year gave a special note with a rich lotto at which the main prize was the Air France KLM air ticket, the biggest partner of this year’s celebration. Among the guests were a large number of leading people in Croatia, representatives of the public authorities and the diplomatic corps.

“We are delighted to have recognized this domain by our members and their partners, for 5 consecutive years, as a place for a pleasant business meeting that blends the Croatian and French business scene. The list of our guests, members and their partners shows us that there are still places for further investments in the Republic of Croatia, and that our Croatian entrepreneurs are recognized as quality and reliable business partners who are openly open the doors for business cooperation in the territory of France and export their products and know how on the French market. The purpose of our Chamber is that these and similar associations further stimulate the development of economic relations between France and Croatia, with all the help of its members, which has become well known outside the borders of the Republic of Croatia as a center of all important business information for the entry of French capital into the Croatian market as and for the emergence of Croatian entrepreneurs on the market of France and finding new partners, “said Višnja Ježić Sorić, President of the Chamber.

Celebration of the opening of Beaujolais Nouveau, this time from the famous winery Château des Maladrets is one of the most celebrated events of the year and is celebrated in many countries of the world, and in Croatia is the celebration organized by the Chamber – the largest.

For years, the Chamber has been following the tradition of young wine celebrations in France and the rest of the world, the third Thursday in November. Sales Beaujolais Nouveau is regulated by law – it is only allowed from 0:01 am of that third Thursday in November, so it can be tasted in Tokyo before in Paris! Beaujolais Nouveau is a red wine made from the Gamay variety and fermented just a few weeks before being sold. With poor tannins, long, fruity, some say that it is the most similar to white wine as it can be black wine – even if it is slightly chilled.