“Interesting day of meetings in Budapest organized by the US Embassy, including conversations with a number of Hungarians with interests in the energy business. Also, nice to spend time with Marie Royce, ECA Assistant Secretary, and David Cornstein,   U.S. Ambassador to Croatia Robert Kohorst tweeted. 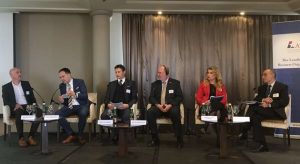 The U.S. Ambassador said  he was very proud of the Croatian government for having the courage to adopt a decision about investing in the project, stressing that over the next ten years it will be clear to everyone that this is a very important decision regarding energy security for Croatia and the region.

Asked if Hungary was interested in investing, Kohorst answered in the positive, adding that this also depended on conditions, but that very constructive talks were underway.

Kohorst said that the LNG terminal would be a very valuable asset to Croatia, not only as an insurance instrument for energy diversification and security but also when it comes to getting favourable prices when buying energy.

In other related news, participants in a working lunch which was organised in Zagreb on Tuesday by the American Chamber of Commerce (AmCham) called on Croatia to actively seek investments directed to concrete industries and companies.

Economy Ministry State-Secretary Zdenko Lucić underscored that Croatia had adopted one of the best laws in Europe to encourage investments but that it is not promoted enough and that that requires additional effort.

US Ambassador to Croatia, Robert Kohorst, said that following Croatia’s success at the World Cup, Croatia is perceived positively but that will not create new jobs or bring investments and that it is necessary to actively seek investments to desired industries.

Kohorst underscored some positive aspect such as the country’s security and its position in the region and that it can develop its business in the entire area and that it had the advantage of being a member of the EU.

The Coca-Cola HBC Croatia General Manager, Ruža Tomić Fontana, says that Croatia has a good regulatory framework for investment attraction, however, she called for speeding up the implementation of investments.