It is believed that the Singapore Convention will make a crucial contribution to the advancement of international trade relations and the development of the world economy. The Convention was signed by the world’s largest economic powers, the US and China. Although the EU countries are not signatories, many, justifiably so, expect progress in this direction. 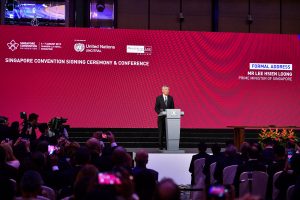 Singapore Convention on Mediation was signed on 7th August 2019.  At the signing ceremony in Singapore, as many as 46 countries signed the Singapore Convention on Mediation in the presence of 1,500 international and national officials, leading international mediators and organizations, business people, investors, lawyers, academics and students from all over the world.

Which countries signed the Convention?

The fact that the biggest global economic powers, like the US and China, are the Convention’s signatories gives special importance to this document considering that the Convention was signed at the height of their trade and currency conflict, and their mutual struggle for dominance in the industries of the future, namely artificial intelligence (AI), robotics and 5G technology.

It was during the trade war the two countries have been waging that these two major economic powers have signed the Convention which promotes the efficiency of dealing with international trade relations. The Convention has been signed by other significant economic powers such as India, South Korea, Israel, Turkey, as well as by several other states including Serbia, Montenegro and North Macedonia. The EU countries and the Republic of Croatia have not yet signed the Convention because of the non-compliance with the Directive 2008/52/EC of the European Parliament and of the Council of 21st May 2008 on certain aspects of mediation in civil and commercial matters, but many, justifiably so, expect progress in this direction.

What does the Singapore Convention bring?

Singapore Convention on Mediation is an instrument for the promotion of international economic relations and the promotion of mediation as an alternative and indeed the dominant and effective way of resolving disputes. The expectations are that the implementation of the Convention will contribute to a faster, easier and more cost-effective resolution of international trade disputes and the rule of law.

Furthermore, the Convention is a major step forward for the growing online dispute resolution sector, as it stipulates the agreements concluded via electronic communication are considered agreements in writing that can be enforced.

The Convention itself is an important step in resolving disputes internationally. It enables the implementation of agreements (settlements) reached in mediation in the same way that court judgments or arbitral awards can be enforced.

What are the primary objectives of the Convention?

– promoting the use of mediation to resolve cross-border trade disputes

The Convention defines the general concept of mediation as the procedure by which the parties seek to resolve the dispute amicably with the assistance of a third party or third parties (“mediators”) who do not have the authority to impose a settlement on the parties to the dispute. Mediation is known for improving efficiency and flexibility of dispute resolution.

As a means of dispute resolution, in many of the most developed legal and economic systems, mediation has become the primary way of resolving disputes, especially in trade and investment disputes, especially when it comes to the leading global economy that is the US, as well as several other developed world economies.

What does mediation offer to entrepreneurs in comparison to state courts or arbitrations?

The benefits of mediation over litigation and arbitration are its efficiency, saving time, cutting costs and preserving other business resources. Mediation gives great flexibility and creativity in reaching solutions that the parties come up with on their own with the help of a mediator. In addition to the settled dispute, successful mediation also ensures the establishment and continuation of good business relations between the parties to the dispute.

The importance and impact of mediation in the world

The importance of mediation for the global economy is also validated by the fact that the World Bank, in its leading publication „Doing Business“, which assesses regulations that affect a country’s business activity, specifically assesses the development of mediation in the legal and economic system of each country. In short, if the mediation in a particular country is more regulated and developed, the rating of business activity for that country is higher.