During its mandate, Romania has the opportunity to prove its strong support to the European integration project. While holding the Presidency of the Council of the EU, Romania will act as a genuine and honest broker in order to find solutions that enable progress of the European agenda. 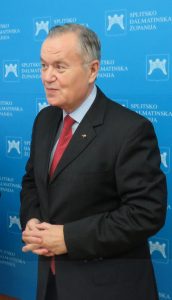 “Through its work and actions during the first Romanian Presidency of the Council of the European Union, Romania strives to contribute to the advancement of the European building process, based on the consolidation of the European cohesion and unity,” says H.E. Mr. Constantin-Mihail Grigorie, Ambassador of Romania to the Republic of Croatia.

The first Romanian Presidency of the Council of the European Union takes place against a backdrop of large-scale developments that will determine the shape of the European Union- the reflection on the future of the Union, the United Kingdom leaving the EU, the transition towards a new legislative cycle as a result of European elections in May 2019, and implicitly, the end of the European Commission and European Parliament’s terms in the office.

The Romanian Presidency of the Council of the European Union will take place at a time when common efforts of the Member States and the EU institutions are needed in order to identify workable solutions to major challenges that the European unification project is currently facing.

Brexit takes the European Union into a new reality. This process must be managed in an orderly fashion, and the unity of the EU27 has to b e maintained, while striving for strong and close future relations with the UK.

The EU is embarking on a new phase after Brexit and together with the Member States and the EU institutions, the Presidency should act in order to create a strategic frame for its future. In this context, a landmark of our Presidency will be the Sibiu Informal Summit on 9th May, two weeks before the European elections. We see this Summit as a crucial moment to raise awareness among the citizens about the added value generated by the EU and to send a message of unity within the Union.

The end of the current EU institutional cycle translates into a high number of pending files that reflect key priorities for the future of our Union and its citizens. We are very ambitious when it comes to achieving tangible results, while being realistic about the complex context and the specificity of this mandate.

For this reason, in the first half of its term, the Romanian Presidency will focus on advancing legislative process, in order to finalise as many files as possible. Work will continue assiduously in the second half of our term when we are going to work on the non-legislative files which are equally important and complex.

The Union of the future needs a solid and appropriate budgetary framework and resources, in order to achieve the objectives of the following seven years. The European budget is a reflection of how we see the European Union in the future.

That is why we need to make sure that the results of the negotiations on the future multiannual budget are equally balanced and well calibrated to the realities that the European citizens perceive on a daily basis. Also, another topic on our agenda is moving forward with the negotiations on the Multiannual Financial Framework, which is a flagship file for our Presidency.

Consequently, we are going to invest a lot of effort into preparing the grounds for a timely agreement on the next multiannual financial framework.

The Romanian Presidency’s work programme is founded on the belief that any vision for the future must be built around the key principles that have steered the evolution of the European Union so far, which maintained their relevance all along the course of the evolution of the European project, and which have the potential to serve as a driving force for our common action towards consolidating the Union.

This is the reason why the approach of the Romanian Presidency of the Council of the European Union revolves around the principle of cohesion, illustrated in our motto and central theme of the Presidency, “Cohesion, a common European value”.

This concept covers many current realities that we have to accommodate at the European level. Furthermore, we consider that the EU policies should be more in line with the principle of cohesion among Member States, regions and citizens.

Hence, Romania aims at achieving tangible results and maximising the benefits that a strong and cohesive Union could bring to each and every citizen.

Firstly, we think it is necessary to enhance the cohesion of political action, in order to strengthen the link between Member States, European institutions and citizens.

Secondly, we need to enhance the economic dimension of cohesion as a catalysing factor in reducing development gaps between the Member States and in strengthening the Internal Market.

Thirdly, the social dimension of cohesion should also be promoted, while keeping in mind the need to ensure social convergence and to preserve the four fundamental freedoms of the EU Single Market.

The Romanian Presidency’s agenda will focus on four main pillars, which will be reflected in the specific actions of ten configurations of the Council of the European Union, as well as in the events that will take place throughout its term.

The Enlargement Policy, as an instrument capable of extending stability and prosperity across Europe, will be another important topic, which contributes to a safer and a more prosperous future for the EU.

During its six-month mandate of the rotating Presidency of the EU Council, Romania will deploy considerable efforts both in terms of the substantive matters, which are of high complexity, and logistics, which implied an extensive preparation process and continues to require the mobilization of the entire Romanian public administration and society.

The calendar of the Romanian Presidency of the Council of the European Union comprises a significant number of meetings and events, both at high and at technical level that will take place mainly in Brussels, Luxembourg, Strasbourg and Bucharest. Approximately 1,700 technical meetings and 40 meetings of the EU Council at ministerial level are scheduled to take place in Brussels. At the same time, and besides the Summit in Sibiu on 9th May 2019, we will host 288 meetings and events in Romania, out of which 22 informal ministerial meetings in Bucharest, 98 high-level officials meetings, 68 expert meetings and 99 conferences. At the same time, actions and events are foreseen in the capitals of the EU Member States as well as in third countries, where Romania will ensure local representation of the European Union.

As the first Member State in the current Presidency Trio, Romania coordinated its working programme with Finland and Croatia, but also with its predecessor, the Republic of Austria, aiming at ensuring a high grade of continuity and consistency of the EU agenda.

The excellent cooperation with Croatia and Finland at the Trio’s meetings held in Zagreb and Bucharest, at the level of Ministers of Foreign and European affairs, Labour and Pensions System, Transports, Economy and Commerce, is a catalyst of the implementation of the objectives assumed.

7.What can Romanian presidency bring to the country?

The following six months present a great opportunity to bring Romania closer to the citizens of the other Member States, and to present a European country deeply anchored in the cultural and spiritual tradition of the European continent.