In the fight against the Coronavirus, digital technology is playing an unprecedented role in the maintenance of daily life and economic and social activities, as well as in the recovery of industry and business. The Coronavirus pandemic is becoming a tipping point for digitalisation – the dawn of a new era – by accelerating the maturity of digital technology: what was once a ‘nice to have’ could now become a ‘crucial to have’. For businesses and organisations to thrive and become more resilient in the medium and longer term, it may be more relevant than before to revisit digital transformation plans in order to stay competitive in the ‘new normal’. 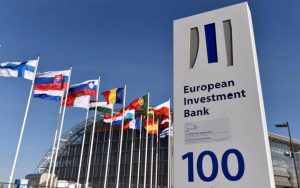 In this context, the new EIB report “Who is prepared for the new digital age? Evidence from the EIB Investment Survey” takes a look at the state of digitalisation in the EU and United States from a unique business perspective. The report shows, based on a company-level survey, that EU firms in most sectors are falling behind the US. It also spells out the key concerns of firms when it comes to the adoption of, and investment in, digital technologies. In particular, it highlights how access to management, skilled labour and the regulatory environment affect the digitalisation of European as well as US firms.

“If European policymakers want European firms to become more digital they need to address structural barriers to investment in digitalisation,” said Debora Revoltella, EIB Chief Economist. “Policy action should develop measures to fast-track the adoption of digitalisation. These include more advanced managerial skills and practices, improving the skills of workers through training and making it easier to finance investments in intangibles and digital technologies. The current Covid-19 economic crisis can be an opportunity to frontload some of those initiatives.”

The EU lags the US in digitalisation

The EIB Digitalisation Index, introduced in the report and based on firm-level data and perception, shows that the EU falls short of the US. Only four EU countries are ahead of the US in terms of digitalisation: Denmark, the Netherlands, the Czech Republic and Finland.

On average, European firms are less often fully digital and invest and adopt digital technologies less than their US peers. The difference between the US and the EU is particularly large in the construction sector, where the share of digital firms is 40% in the EU and 61% in the US. The difference in adoption rates between EU and US firms is 13 percentage points in services and 11 percentage points in the infrastructure sector. With regard to manufacturing, only 66% of firms in the EU, compared to 78% in the US, report having adopted at least one digital technology.

Size also matters for digitalisation: large firms tend to digitalise faster in both the EU and the US. This size effect is particularly pronounced among manufacturing firms. Only 30% of EU firms with fewer than ten employees adopted digital technologies, whereas this share increases to 79% for firms with more than 250 employees. . A major barrier that is specific to Europe is an unfavorable firm-size distribution. Many small, especially older, firms in the EU consider labour market regulations, business regulations and the lack of external finance to be major obstacles to investment, which may further exacerbate the delay in digital technology adoption.

The EIB’s digital projects in the Western Balkan

In Serbia, school digitalization project is currently under appraisal. This potential EUR 100 million investment will encompass introduction of the internet, new IT equipment, e-books, e-classrooms and e-diaries into schools, as well as training of teachers on how to conduct a digital education. Among other benefits, this project will enable primary and secondary schools across Serbia to conduct online teaching uninterruptedly, even in the situations when it is essential to stay at home due to virus outbreaks, natural or other disasters.

Additionally, the EIB participates in financing the construction of Science-Technology Parks in Belgrade, Nis and Novi Sad that encourage advanced technologies and digitalization, among other activities. These science and research centres foster IT companies and start-ups that develop digital services and software solutions for the enterprises, contributing to digitalization of the local economy. Up to now, the EIB has allocated EUR 200 million to this programme.

In Albania, the EIB is financing the regional broadband infrastructure development in cooperation with the WBIF (Western Balkans Investment Framework). This project is to instigate an overall digital transformation of the Albanian economy and society, which had the lowest fixed broadband penetration rate in the region amounting to merely 10%. This initiative is to ensure better internet connection for 500 healthcare and 3000 educational facilities with at least 30MB, whereas the share of households with broadband connection is expected to increase to as much as 70%.

When it comes to the EIB’s digitalization projects in Montenegro, an investment including provision of new information and communications technology equipment for 17 schools has been signed at the end of 2019, within the Education Rehabilitation Programme. The project will increase the country’s schooling infrastructure capacity to 2070 additional places and create approximately 530 new jobs. The EIB provided EUR 18 million for this project amounting to EUR 40 million in total. This loan has been complemented with EUR 2.7 million grant for the education sector provided by the EU through the ERI (Economic Resilience Initiative).

Read the report and the country-level analysis:

The European Investment Bank (EIB) is the long-term lending institution of the European Union owned by its Member States. It makes long-term finance available for sound investments in order to contribute towards EU policy goals. The EIB also supports investments outside the EU.

About the Economics Department of the EIB

The EIB Economics Department provides economic research and studies, as well as unique analysis of investment activities in the EU and beyond, and supports the Bank in its operations and in the definition of its positioning, strategy and policy. Chief Economist Debora Revoltella heads the Department, a team of 40 economists.

About the EIB Investment Survey (EIBIS)

The EIB Group Survey on Investment and Investment Finance is a unique, annual survey of some 13,500 firms. It comprises firms in all EU Member States, as well as a sample of US firms which serves as a benchmark. It collects data on firm characteristics and performance, past investment activities and future plans, sources of finance, financing issues and other challenges that businesses face. Using a stratified sampling methodology, EIBIS is representative across all Member States of the EU and for the US, as well as for firm size classes (micro to large) and four main sectors. It is designed to build a panel of observations to support time series analysis, observations that can also be linked to firm balance sheet and profit and loss data. EIBIS has been developed and is managed by the Economics Department of the EIB, with support for development and implementation by Ipsos MORI.