Croatia and Azerbaijan have good economic cooperation, they cooperate excellently in international formats and there is great potential for closer cooperation in many areas of mutual interest, Croatian Foreign Minister Gordan Grlić Radman said during an official visit to Azerbaijan. 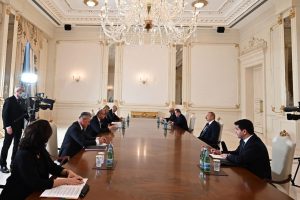 Grlić Radman, who is accompanied on his visit by a large delegation of Croatian business people, met today with his Azerbaijani counterpart Jeyhun Bayramov. “Croatia and Azerbaijan have been strategic partners since 2013, and in 2019 Croatia decided to open its embassy in Baku, considering the significant potential for economic cooperation… I believe that this visit will boost our economic cooperation and create many new business opportunities,” said Grlić Radman.

He noted that Croatia had a lot to offer in terms of goods and services, notably in the field of IT, energy production, shipbuilding, pharmaceutical and food industries as well as the defence industry.

“I would particularly underline the possibility of cooperation in mine clearance, for which Croatia has advanced technology and the competence that Azerbaijan needs,” the minister told reporters after the meeting. He recalled that several Croatian IT companies had opened their offices in Baku. “We would like to see more Croatian companies doing business in Azerbaijan, just as we want Azerbaijani companies and investments in Croatia,” he added.  Grlić Radman thanked Azerbaijan for the aid sent after the 29 December 2020 earthquake in Petrinja, as well as in the fight against the COVID-19 pandemic. Minister Bayramov said that Croatia was among his country’s top ten trade partners, underlining also the importance of parliamentary cooperation between the two countries.

Croatia is the second biggest European buyer of Azerbaijani oil but there are many other areas where we can cooperate, he said. Bayramov said the two countries must also cooperate in international institutions and forums, underlining the importance of building relations with the EU, to which Croatia can contribute. Azerbaijan is a reliable energy partner to the EU, Bayramov said, recalling that at the beginning of this year the South Caucasus energy corridor was put into operation. Azerbaijan’s oil reserves are estimated at 14 billion barrels. The Azerbaijani minister said that once COVID-19 restrictions were lifted, there would no longer be any obstacles to the two countries’ successful and intensive cooperation in the field of tourism. We see huge potential in that sector, he said, adding that talks were underway to facilitate the visa regime.

The two ministers also discussed the situation in Southeast Europe and the South Caucasus. Grlić Radman reiterated that Croatia was one of the biggest advocates of EU enlargement, “because that is the best way to achieve long-term stability and prosperity, naturally, on the condition the set criteria are met.” “As for the South Caucasus, Croatia advocates a more active role of the EU in the region, as well as stronger cooperation in dealing with common challenges such as migrations, energy, pandemic and the like. We support the EU-Azerbaijan cooperation in the context of the Eastern Partnership and are preparing together a summit, to take place in December,” Grlić Radman said.