In Ljubljana’s Northern Park, the two presidents unveiled a bust to Croatian politician, linguist, ideologist, journalist and writer Ljudevit Gaj, which was erected on the initiative of the Federation of Croatian associations in Slovenia in cooperation with Ljubljana city authorities. The bust of Ljudevit Gaj was created by academic sculptor Marjan Mirt, resident of Maribor, and has been funded by a project of the Central State Office for Croats Abroad. 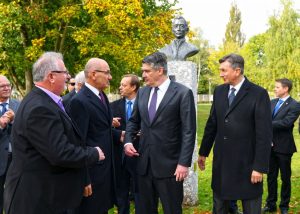 “We no longer talk that much about the good relations between Croatia and Slovenia, it’s a fact, like something etched in stone. We have no better neighbour than Slovenia. I would be happy if we had such relations, reasonable, with a lot of emotion, not too much, only as much as normal and mature people need, with more or less all key issues resolved and with the awareness that only with discussion, understanding, dialogue and sometimes argumentation, can problems be solved. We have less need for this”, President Milanović said in Ljubljana. 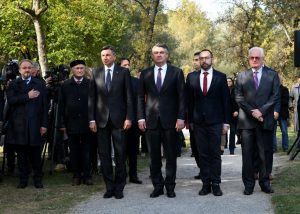 He added that Ljudevit Gaj was a figure who symbolized everything that is European in Croatia, always has been and sometimes we were not even aware of it how European it was. “Ljudevit Gaj and all the people who in the beginning of this new or awakened conscience – that had been asleep for centuries and was awakened in his most famous song ‘Još Horvatska ni propala’ (Croatia Has Not Yet Fallen) – were advocating the Illyrian movement and not Croatianhood. Subsequently, he changed his mind and instead of the original Kajkavian dialect on which he wanted to base the Croatian language, he ultimately made a compromise, changing it to Štokavian”, the Croatian President stated in Ljubljana.

Later in the day, on the promenade along Bundek lake in Zagreb, presidents Milanović and Pahor unveiled a bust to Slovenian poet France Prešeren. “Earlier today in Ljubljana we unveiled a bust to Ljudevit Gaj, a contemporary of France Prešeren, one of the greatest Slovenian poets, author of the stanza which became the official Slovenian national anthem. What it has in common with Croatia, besides being written at nearly the same time, is that it is very peaceful”, President Milanović stated at the unveiling of the bust of France Prešeren.

He added that both were lawyers by profession, but unsuccessful ones. “It was at the time when the national word and language, without which there is no nation, were formed, built, measured and designed by lawyers. Today this is unthinkable. Such were the times, today we live in the time of a bureaucratized, but common European Union. A most beautiful day, this morning Gaj in Ljubljana, and this afternoon Prešeren – let us continue this way. Croatian-Slovenian relations are becoming a more and more beautiful story, and there is no reason for it not to remain as such”, President Milanović said in concluding his address during the unveiling of the bust of France Prešeren on Bundek lake with Slovenian President Borut Pahor.

The bust of France Prešeren is the work of academic sculptor Metod Frlic, and the conceptual design, the bust, the pedestal and the base were entirely funded by the Embassy of the Republic of Slovenia and the Slovenski dom (Slovenian Home) in Zagreb. The City of Zagreb funded the groundwork, the paving stones of the access way and the landscaping.