The Prime Minister Andrej Plenković organized a reception , at the Banski dvori, for representatives of the Diplomatic Corps accredited in the Republic of Croatia. In his speech, Prime Minister Plenković said that this political year was taking place in a very specific context for the world, Europe, but also for Croatia due to the Covid 19 pandemic, which significantly changed the work and activities of governments around the world. 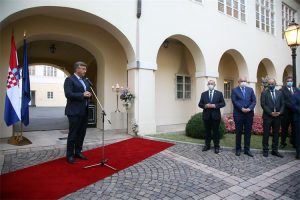 “So far, we have dealt well with these challenges, especially in the first difficult months. We went to the timely closure, and then to the gradual and timely opening, which allowed us a solid result of this tourist season,” Plenković reminded, adding that tourism is one of those branches of the economy that significantly affect Croatian GDP. The Prime Minister said that Croatia, like many other countries, had an increasing number of infected people in recent days. “The overall numbers, which are worrying, are significantly different from the clinical picture of those infected,” he added.

He said that the Civil Protection and Health Service Headquarters will work to reduce the number of infected, especially before the beginning of the school and academic year, which is extremely important for Croatia and its neighboring countries. The Prime Minister reminded those present that after the elections in July, the parliamentary majority consists of the HDZ, as the strongest party, representatives of national minorities and several liberal parties. 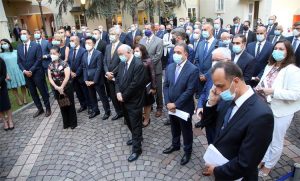 We want to make life from national minorities even better

“Precisely positioned cooperation enables us to pursue a policy that is responsible, inclusive, that works to have a tolerant society where representatives of national minorities are not only adequately represented in the Croatian Parliament, but by participating in government can further realize those priorities that will to make our fellow citizens from national minorities even better “, said Plenković. This message, the Prime Minister pointed out, is not only a message within Croatia, but also in the surrounding countries, especially in Southeast Europe, because this is a model and way of working that we believe best reflects the universal and European values ​​shared by the Croatian Government. In this context, the Prime Minister singled out the celebration of the 25th anniversary of Operation Storm, Victory and Homeland Thanksgiving Day and Croatian Veterans Day, when we recalled that he emphasized that the Homeland War was the foundation of modern Croatia, Croatian freedom, democracy and independence. and territorial integrity.

“We also remembered all the victims who were given for Croatian freedom. We also expressed reverence for the victims of Serbian and other nationalities in the Homeland War,” he said. In that context, the Prime Minister pointed out the extremely important messages sent by Vice Presidents Medved and Milosevic to the Serb civilian victims of the war in Grubori yesterday.

“On this track, we will pursue an active policy, a policy that will look to the future, and have a fair and true view of our recent history, because only in this way as a whole society can we move forward homogeneously and work for the recovery of the Croatian economy,” he said.