National Day (Fiesta Nacional de España) is an annual national public holiday in Spain on October 12. It commemorates when Christopher Columbus first set foot in the Americas in 1492. It was opened in Croatia by a welcome of H.E. Eduardo Aznar, Ambassador of Spain, at the reception given on October 18, at Mimara Museum in Zagreb, with the occasion of the Way of St. James (Camino de Santiago) exhibition of photographs, picturing the famous ancient pilgrim route by the Croatian author, Ivica Bota.

The diplomatic reception was attended by the Deputy Speaker of the Parliament of the Republic of Croatia, H. E. Mr. Željko Reiner, honorable representatives of the Government of the Republic of Croacia, Minister of Environmental Protection and Energy, H.E. Mr. Tomislav Ćorić, Minister of State Property, H.E. Mr. Goran Marić, the Mayor of Zagreb, H.E. Mr. Milan Bandić, fellow diplomats, members of culture, education, business, media, public life and friends of Spain.

On the occasion of this event, Ambassador Aznar addressed the guests: “Spain has been defined as a multiform mosaic, a diverse and plural country. And our history has shown us that when we work united, respecting that diversity, we have achieved the highest levels of economic development, civil liberties and social welfare. This has been proved once again by the last 40 years of democracy. We are convinced in Spain that we will overcome the challenges that Catalonia and the rest of Spain are facing these days“.

The National Day of Spain was the perfect occasion as well to thank all those who in Croatia work together with Spain in bringing the two countries together. Therefore, the annual “Friend of Spain” Diploma was granted to the Varaždin Baroque Evenings Festival team, which brought in focus, once more and deservedly, the excellent collaboration with Spain as a partner country in the 2016 edition of the Festival. The Diploma was awarded to the Director of Varaždin Baroque Evenings, Mr. Davor Bobić and the Director of the Concert Agency of Varaždin, Mr. Raymond Rojnik, accompanied by the high representatives of the City of Varaždin and Varaždin County. 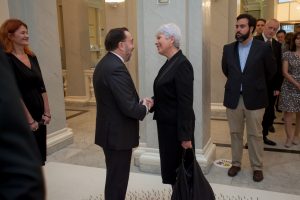 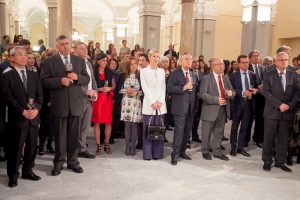 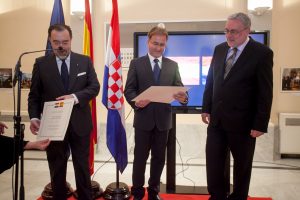