This is a continuation of the activities to deepen the economic ties between the two countries, which were intensified in the middle of last year when the president of the Croatian Chamber of Economy Luka Burilović held meetings with the president of the Republic of North Macedonia, Stevo Panderovski, and representatives of professional chambers.

In his introductory speech, Mr. Burilović emphasized that the growth of trade between the two countries and the possibilities of cooperation in the fields of energy, tourism, transport and the construction industry obligate them to even more intensive cooperation, but also stronger ties in the field of economic diplomacy, where Croatia, as a future member of the Eurozone and the Schengen Area, the Northern Macedonia can be a reliable partner and ally on the path to EU accession. He added that in recent years, trade between the two countries has been around 200 million euros per year, but last year it grew to 246 million euros, and this trend has continued this year, when in the first seven months we have recorded an increase in trade by 30%.

“The goal of this forum and the signing of the Memorandum is for the trade exchange between our countries to be even greater, since there is a whole range of areas of mutual interest,” said Butković. “North Macedonia is a friendly country that successfully opened negotiations with the European Union this summer. We have found ourselves again in the world and European crisis caused by this war in which we are all struggling within our countries with answers to the energy crisis. These are big challenges for North Macedonia as well, and membership in the European Union is welcome for them, and Croatia will help them a lot in that regard,” concludes the Deputy Prime Minister.

Fatmir Bytyqi, the Vice-President of the Government of the Republic of North Macedonia, expressed his satisfaction with the friendly and partnership relations between the two countries, which need to be further improved in the field of economy. “Northern Macedonia is seen as a full member of the European Union in the near future, and here we rely to a significant extent on the support of the Government of the Republic of Croatia and the concrete experiences of Croatian businessmen in doing business on the common European market,” he pointed out. 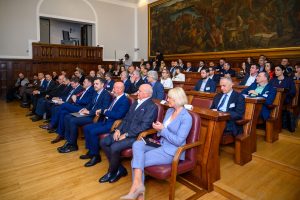 According to CNB data, Croatia invested around 108 million euros in North Macedonia in the period from 1993 to 2021. Last year, goods worth EUR 101 million were imported into Croatia, and EUR 145 million were exported. The structure of trade is dominated by food, medicines and various products of the metallurgical industry. Last year, Macedonian tourists had over 207,000 overnight stays, which is a 63% increase compared to the pandemic year 2020.