We welcome the deepening of bilateral relations, and we are interested in furthering partnership in the fields of trade, innovation, and sustainable development. Croatia has a lot of talent to offer in these segments; creating jobs for the future.

“Sweden wants to foster a strong spirit of cooperation between our two societies”, this is how H.E. Mr. Lars Schmidt, the Swedish Ambassador to Croatia briefly explains the goals on his country in the cooperation with Croatia. 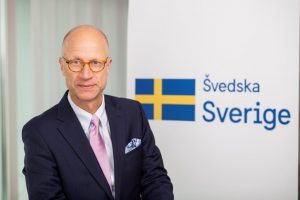 I have been living in Croatia for nearly five years, monitoring its transformation into a modern EU Member State, promoting modern values, diversity and reconciliation in a regional context.

Furthermore, around 300,000 Swedish tourists visit Croatia every year, and the well-integrated Croatian diaspora in Sweden, which numbers close to 30,000 people, contributes immensely to the excellent bilateral ties between our countries.

I am happy to see such an active interaction between our countries.

As the most important outcome I would mention the Swedish Business Club, which was initiated at the meeting between the Croatian President and the Swedish Prime Minister during the official visit in 2017.

We are interested in furthering partnership in the fields of trade, innovation, and sustainable development.

Our experience is that synergies generated by close connection between Swedish universities, research institutes, public sector and private sector leverage the R&D output and make us more competitive. We also see that international innovation collaboration is becoming increasingly important for a small and export-oriented economy such as Sweden’s. This is why we are always putting effort in developing opportunities for international cooperation.

I would also like to mention the interest expressed by the Wallenberg Group in using Croatia as a hub for promoting excellence in software engineering. This project is supposed to engage Croatian stakeholders, including the Government, to further develop modern R&D and help with alleviating the brain drain.

Croatia and Sweden are EU member states. We both believe in continued EU enlargement as a prerequisite for regional stability. Croatia plays an important role in the region, being an EU Member State able to lead by example and share experiences.

Croatia’s has modern infrastructure and thorough knowledge about South Eastern Europe. Hence, Sweden considers Croatia a key partner for cooperation in the field of security policy.

Nordic co-operation is one of the most extensive forms of regional co-operation anywhere in the world. It had been institutionalised since 1952, with the establishment of the Nordic Council. Its primary goal is to create the best possible conditions for people and business to move freely between the countries. Functionality, design and simplicity are markers of Nordic cohesion, parallel to our consensus-based philosophy, which constitutes a fundamental value in our societies.

In the Nordic countries, we aim to be fantastic neighbours to each other, and our tradition of cooperation has fostered a secure environment contributing to prosperity and economic development.

Our economic cooperation is diverse, and we are keen to invest in many fields of modern technology, but we are especially interested in spurring the cooperation in the areas of research and development, where Sweden can provide an added value – e.g. digital transformation and sustainable solutions in a globalized economy, where operating within a functioning market economy is essential.

We are also interested in developing a cross-section between private sector, academia and the public sector, also called the Triple Helix model. Mostly because we understand that we, as a small country, need to collaborate with others to succeed and to develop competences – for the sake of the future, for attracting talent, and for supporting European competitiveness in the long run.

In this regard, I would like to mention a successful joint venture – Ericsson Nikola Tesla, which shows how cutting-edge development can be implemented in Croatia. Moreover, I have to mention the arrival of Tele2 in the Croatian market, which provided sound competition in the mobile communication market. There are many other examples – Ikea, Saab and Securitas have all seen potential in Croatian business and at the same time, proved that Sweden has a lot offer Croatia.

We have about 30,000 people of Croatian origin living in Sweden. They are usually people that have adapted very well to the Swedish society and they really combine the best of the two worlds. This helps a lot in terms of our countries better understanding each other, in cultural aspect and otherwise.

We are outdoor people enjoying our unique habitat in the vast territories in the North where the EU’s only indigenous people – the Sami – live. The Sami constitute a national minority in Sweden.

Would you believe it if we told you that 97 per cent of Sweden is uninhabited? Many factors contribute to Sweden’s access to its abundant nature. Most importantly, Sweden’s constitutionally guaranteed right of public access (Allemansrätten) assures that the land is open to everyone. This concept, deeply ingrained in every Swede, creates a sense of collective stewardship of the land. They understand that with rights come responsibilities. The rule of thumb is “Don’t destroy, and don’t disturb”.

While recognising the need to protect nature and its resources, Sweden was the first country to establish an environmental protection agency in 1967. Nowadays, more than half of our energy comes from renewable sources. Almost 100% of household waste is recycled and since the mid-1990’s, we have actually been one of very few industrialised countries that have managed to pair a growing economy with falling emission levels.