The president of the Tokyo Olympic organising committee has resigned following widespread pressure to do so over remarks that were criticised for being derogatory against women.

Yoshiro Mori, who is also Japan’s former prime minister, told a meeting of the Japanese Olympic Committee board of directors earlier this month that he thought women talked too much, prompting uproar in a country where women are seldom seen in politics and board rooms. 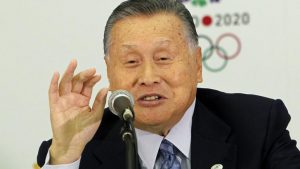 The 83-year-old initially refused to resign, saying he had been devoted to his role for years but bowed to the pressure and non-stop criticism on Friday.
“As of today I will resign from the president’s position,” he told an executive board and council meeting. His successor is expected to be picked later in the day.
According to early reports, Mori would like 84-year-old Saburo Kawabuchi, the former president of the governing body of Japanese football, to take over his role – but amid a scandal highlighting workplace sexism, this will raise the issue of why a woman has not been considered.
Kawabuchi, who participated in the 1964 Olympic Games, indicated he had been contacted by Mori but suggested he might not be the best choice.

It is not clear whether Mori’s resignation will be enough to clear the way for a smooth running of the upcoming Games, which have already proved a struggle when accounting for the pandemic.

Opening on July 23, the tournament is set to receive 11,000 athletes, and 4,400 more Paralympic athletes a month later. Recent polls showed 80% of Japanese citizens saying they want the Olympics cancelled or postponed.