In cooperation with the  Croatian Business Club in Belgrade, Croatian ambassador to Serbia, H.E. Hidajet Biščević, journalist Duška Jovanić and numerous other artists and public figures from Serbia, the reputable Belgrade’s monthly in English, Diplomacy&Commerce has launched a humanitarian campaign by selling paintings and photographs called “Artists from Serbia for Glina, Petrinja and Sisak – painters and photographers helping people affected by the earthquake in Croatia. “ 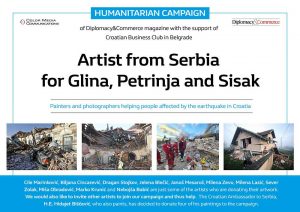 Some of the most renowned Serbian painters and photographers and the Croatian ambassador to Serbia H.E.Hidajet Biščević will donate their artwork for charity sale that will take place online on www.diplomacyandcommerce.rs/serbian-artists-for-glina-petrinja-and-sisak/ with all the proceeds going towards helping the earthquake victims in Croatia.

Cile Marinković, Biljana Cincarević, Dragan Stojkov, Jelena Blečić, Janoš Mesaroš, Milena Zevu, Milena Lasić, Sever Zolak, Miša Obradović, Marko Krunić and Nebojša Babić are just some of the artists who are donating their artwork. We would also like to invite other artists to join our campaign and thus help. 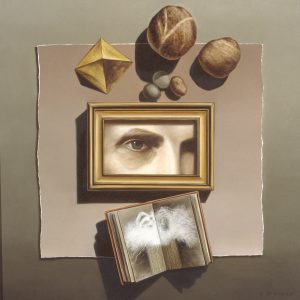 Robert Čoban, president of the Color Press Group, the creator and initiator of this charity auction, points out that it is important to be united in moments of need. “Following the initiative of several Serbian artists who wanted to donate their artwork for the benefit of residents of Glina, Petrinja, Sisak and other places in Croatia affected by the earthquake, we decided to launch our Diplomacy & Commerce charity campaign. We contacted Croatian Ambassador, H.E. Hidajet Biščević, who is also a painter, to join the campaign. He will donate four of his paintings. We have also invited representatives of companies and foreign embassies in Belgrade to join the campaign. I believe that we will raise a good amount of money to provide the people affected by the earthquake with the things they urgently need. The online sale of paintings and photographs by Serbian artists will last until January 25th. The buyers will be able to pick up the purchased artwork after this date and socialize with the artists who donated them at a reception at the residence of the Croatian ambassador, during a special programme hosted by the actor and singer Frano Lasić. We believe that the role of the media is to be initiators of humanitarian activities, while Diplomacy&Commerce magazine, which comes out in Belgrade and Zagreb, sees just that as its mission,” Robert Čoban says.

The campaign, which launches today, is also joined by the Ambassador of the Republic of Croatia to Serbia, H.E. Hidajet Biščević, who calls himself an “amateur painter and decorator”, because in his spare time he also paints, or as he says, “tries to paint”. Ambassador Biščević is known for donating his paintings for humanitarian causes.

„For instance, I am especially proud of the charity auction held in Tajikistan, when about fifty of my paintings were sold and seven kindergartens in the capital Dushanbe and its surroundings were properly equipped thanks to the money raised,” he says.

On this occasion, the Ambassador would also like to especially thank the Serbian artists for their wonderful gesture of joining this charity endeavour to help the people affected by the earthquake in Croatia.

Let’s unite in humanity – join the campaign to help the people of Glina, Petrinja and Sisak!

“Artists from Serbia for Glina, Petrinja and Sisak”

All the artwork is sold at the indicated price can be seen on www.diplomacyandcommerce.rs/serbian-artists-for-glina-petrinja-and-sisak/ .

If you are interested in purchasing any of the exhibits, please send an inquiry to auction@diplomacyandcommerce.rs .

If the exhibit is still for sale, we will send you payment details and you can proceed with paying the amount indicated on the website.

After the transaction goes through, you will become the owner of the artwork that you will be able to pick up at the official event held at the Croatian ambassador’s residence, which will take place in line with the current recommended epidemiological measures on the date that will be communicated at a later stage. The singer and actor Frano Lasić will host a special programme and ceremony of personally delivering the paintings and photographs to their new owners.

All the proceeds collected during Diplomacy&Commerce’s humanitarian campaign “Artists from Serbia for Glina, Petrinja and Sisak” will go to the victims of the terrible earthquakes in Croatia.

Online sale of the artwork will take place from January 8th to January 25th, 2021 on the official website of Diplomacy&Commerce.

Vanja Kovačev, PR of the Belgrade edition of the magazine Diplomacy & Commerce

Participate in the humanitarian campaign of Diplomacy & Commerce magazine.

Buy a work of art and help the people of Glina, Petrinja and Sisak.