The European Union is absolutely unanimous in the stance that citizens of all member states have to be exempted from the visa regime for entry into the United States, said Croatia’s Interior Minister Davor Božinović. 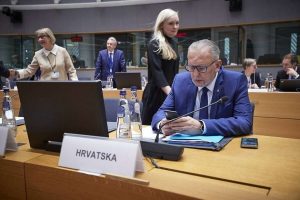 EU-USA ministerial meetings in the fields of justice and home affairs are held twice a year and focus on transatlantic cooperation and common security threats.

After a debate at the Civil Liberties, Justice and Home Affairs Committee, Božinović addressed the press and said that the EU was unanimous in its stance that citizens of all member states should be treated equally with regard to the U.S. Visa Waiver Program. US citizens are permitted to travel to all EU member states without a visa while Croatian, Bulgarian, Romanian and Cypriot citizens are still required to apply for a visa to enter the USA.

“It was evident at the meeting in Washington and during the committee’s debate today that the EU is unanimous with regard to visa free travel for citizens of all member states,” Božinović said.

He said that the committee meeting was dominated by the issue of transatlantic cooperation regarding high technology, particularly with regard to cross-border access to electronic evidence and warrant-proof encryption at an international level.

“It is necessary to find a balance between protection of fundamental civil rights and enabling police and judicial authorities to exchange data as quickly as possible because without that, we cannot fight crime effectively,” Božinović said.

Asked to comment on criticism expressed by some members of the European Parliament last week concerning the conduct of Croatia’s police toward migrants, Božinović reiterated that Croatia would not allow illegal entries into its territory.

“Our position is clear. We will not allow illegal entry into Croatian territory and that has nothing to do with the right to international protection. We are open when it comes to anyone who is in need, however, Europe and the world have to find a response to the question of how to treat migrants who are seeking a better life and refugees,” said Božinović.

Božinović added that reports indicate that a growing number of people are using the right to seek asylum so they can physically enter the EU and then seek a place for a better life there. “I can understand that when it comes to individuals, however, the state has to protect its interests, which includes protecting the national border,” concluded Božinović.