On the occasion of European Day of Remembrance for Victims of Stalinism and Nazism, Prime Minister Andrej Plenković on Friday paid his respects at Zagreb’s Mirogoj cemetery to all the victims on non-democratic regimes in the 20th century. 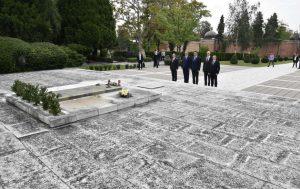 Plenković who was accompanied by Deputy Prime Minister and Minister of Interior Davor Božinović, Veterans’ Affairs Minister Tomo Medved and special adviser of social issues, Academic Zvonko Kusić, lit candles at the grave of late president Franjo Tuđman, at the grave for national heroes and at the memorial to the victims at Bleiburg, the government’s public relations office reported.

European Day of Remembrance for Victims of Stalinism and Nazism, was designated by the European Parliament in 2008/2009 as “a Europe-wide Day of Remembrance for the victims of all totalitarian and authoritarian regimes, to be commemorated with dignity and impartiality”, and was confirmed by a Resolution in the European Parliament in 2009. The Croatian parliament endorsed the Resolution in 2011 as the day of remembrance of the victims of totalitarian and authoritarian regimes in Croatia.

Croatian government representatives marked the day around the country where various execution sites have been identified.