The decision on a heavy-waste treatment facility comes one year after the announcement of INA’s R&M New Direction 2023 program, which aims to transform INA’s refining system to generate profits instead of losses. 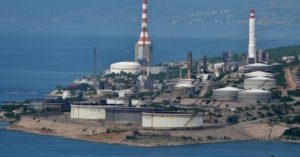 INA made a decision to invest a massive four billion kuna in a heavy waste treatment plant at the Rijeka Oil Refinery. As was explained during an extraordinary press conference in Zagreb, the company’s supervisory board gave its prior approval for the construction of the Heavy Duty Processing Facility in Rijeka, and INA’s management board then made a unanimous decision on the investment. Works on the new plant will begin early next year, they say, and it is expected to start operating at some point in 2023.

Sándor Fasimon, CEO of INA, said the decision on the heavy-duty processing plant marks an important step in the implementation of the R&M New Direction 2023 program, as well as an important moment in the company’s history as it is the largest investment INA has made in decades.

“With this decision, the Rijeka Oil Refinery will be transformed into a modern European refinery while ensuring that INA maintains a leading position on the market. It’s a major investment that will significantly affect the company’s operations in the future,” said Fasimon.

The chief executive officer of the MOL Group and the deputy chairman of INA’s supervisory board commented that this decision confirms the MOL Group’s commitment to INA. “By constructing a heavy waste treatment plant, we’ll significantly increase the complexity and efficiency of the Rijeka refinery. I firmly believe that this investment will have a significant positive impact on the company’s profitability in the future,” said Molnar.

A year ago, Prime Minister Andrej Plenković promised us a “Christmas present” in the form of an announcement that Croatia would go ahead with the purchase of MOL’s stake in INA.

According to INA, and as previously mentioned, the decision on this treatment facility comes one year after the announcement of the R&M New Direction 2023 program. The program includes the concentration of crude oil processing activities in the Republic of Croatia at the Rijeka Oil Refinery and, as part of this, the conversion of the Sisak Oil Refinery into an industrial centre that will cover the production of bitumen, which was approved in March this year and is set to launch in 2021.

Still to come is a logistics hub and, potentially, lubricant production and even a bio-component refinery. With the implementation of all activities covered by the INA R&M New Direction 2023 program, after 2023, INA expects an average annual EBITDA growth of over 1 billion kuna in total.