The Croatian Army is the guarantor of the security and stability of the Croatian state and people, and the values created in the Homeland War are the basis for its further development.

Our priority is to strengthen the Croatian Army, and that’s why, as before, we will focus on investing in soldiers, non-commissioned officers and officers, states Mario Banožić, Minister of Defence of the Republic of Croatia, for Diplomacy&Commerce. He added that in accordance with provisions of the Defence Act, the armed forces of the Republic of Croatia can be used to assist civil government institutions, organizations and services intended for protection and rescue and to assist the population in the event of disasters and major accidents, search and rescue, transport of casualties or the sick, including emergency medical flights, of which the Croatian Government or the Minister of Defence will decide in accordance with provisions of the said Act. 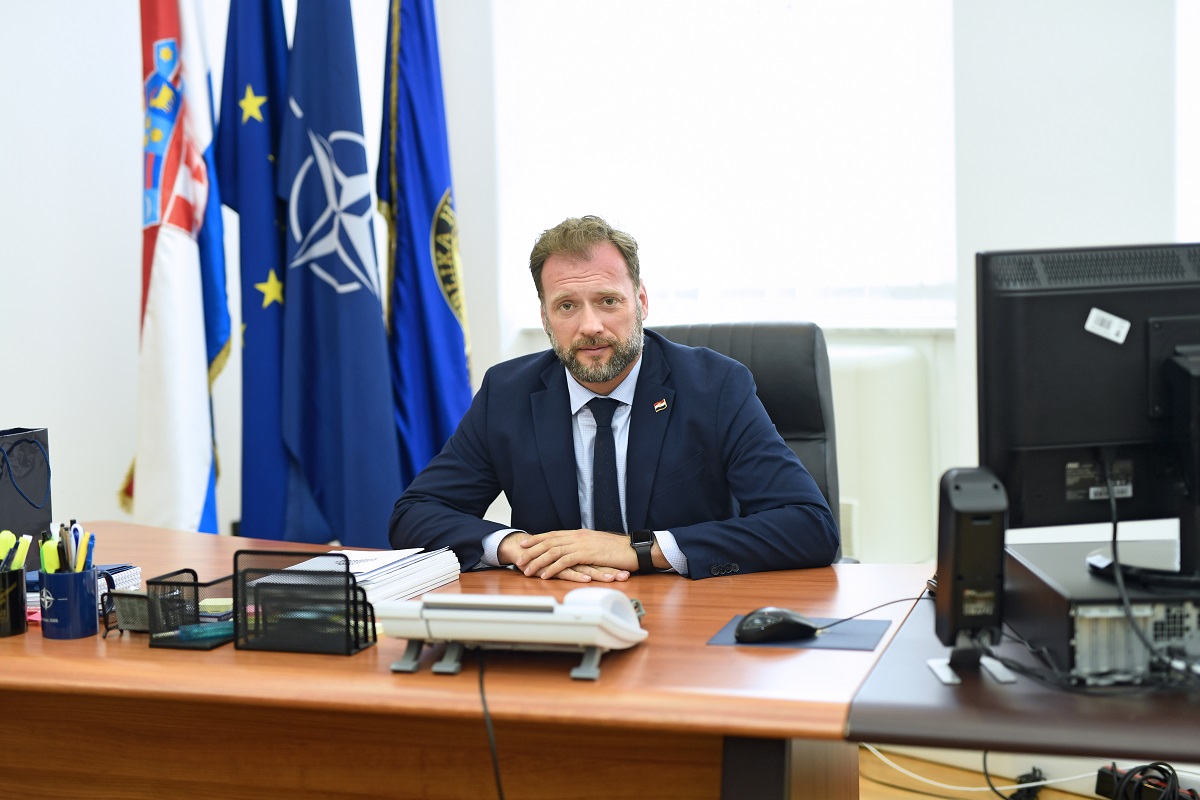 – That’s right, this year we are celebrating 30th anniversary of the establishment of the Croatian Army, which thanks to its training, motivation and readiness enjoys excellent reputation in our society and trust of citizens of the Republic of Croatia, and I can openly say that not only in the Republic of Croatia but within NATO as well, it enjoys significant reputation and holds the status of a reliable partner. That is why, if circumstances caused by the coronavirus pandemic allow, we will proudly celebrate the thirtieth year of the founding of the Croatian Army together with our people.

As far as priorities are concerned, our priority is certainly the strengthening of the Croatian Army and that is why, as before, we will focus on investing in soldiers, non-commissioned officers and officers. Aside from the process of procuring a multi-purpose fighter plane, i.e. the decision and signing of contracts for the current year, among the most important projects of equipment and modernization is certainly the equipping of the ninth APC PATRIA with DUOS UT30MK2 and modification of DUOS with ABG 40mm, then procurement of ZLIN aircraft for the Croatian Air Force, we have in store the preparation of infrastructure and training of pilots and technicians for the reception of the Black Hawk, which is planned for 2022, equipping the Croatian ground forces with assault rifle VHD-D2 and the continuation of ongoing projects to equip coastal patrol boats. Our goal is to modernize and equip all three branches of the Croatian Army, raise the level of training and preserve the current rights of Croatian soldiers. There is also the completion of the Long-Term Development Plan of the Armed Forces, which creates a ten-year plan for equipping with the listed sources of funding, i.e. with which we are defining projects in the next ten years, which will be adopted or approved by the Government of the Republic of Croatia and the Croatian Parliament based on this document.

2. How do you see the role of the Croatian Army in society today?

Croatian citizens simply know and feel that in every situation they can truly rely on the speed and professionalism of our army and that their safety is really in the hands of the best, which has been proven in situations such as the coronavirus pandemic, strong earthquakes that hit the city of Zagreb and Sisak-Moslavačka County, all the way to large forest fires, floods and other natural disasters.

In order to justify the epithet, i.e. the role of the guardian of Croatian security, our goal is to continue to develop and strengthen our defense capabilities. We are also aware of the role that the Croatian Army has in the context of membership in the European Union and NATO, in whose missions and operations Croatian soldiers make an immeasurable contribution to building world peace and stability. From all the above, we can conclude that the Croatian Army of today is truly a capable, ready and trained military force worthy of the role of guardian of Croatian territorial integrity, sovereignty and independence.

– Today, the Croatian Army is based on the experiences and values ​​of the Homeland War and thus inherits the tradition of the victorious Croatian Army. At the center of its development is the “soldier” who, in addition to quality living and working conditions, has the opportunity to study and improve both in the Republic of Croatia and at prestigious international military academies. Today, the Croatian Army is the guarantor of security and stability of the Croatian state and people, and the values ​​created in the Homeland War are the basis for its further development.

4. In crisis situations the army is at the service of the needs of the population. The military was of great help in the areas affected by the earthquake and then the pandemic. How important is the leadership and command line in these situations?

– In accordance with provisions of the Defence Act, Armed Forces of the Republic of Croatia can be used to assist civil government institutions, organizations and services intended for protection and rescue and to assist the population in the event of disasters and major accidents, search and rescue, transport of casualties or the sick, including emergency medical flights, of which the Croatian Government or the Minister of Defence will decide in accordance with provisions of the said Act.

The Croatian Army is one of the few organizations that can respond to the crisis quickly already in the initial phase, because it has constantly ready forces, which contributes to reducing the consequences of the crisis from the very beginning.

The leadership and command line in the military is extremely important, as in civil society, or in private companies. Commanders have insight into the strategic, broader picture, and that picture narrows toward the soldier. This does not waste resources or duplicate efforts, which implies a quick, efficient and cost-effective response to the crisis.

5. Which of the important events related to the equipping and modernization of the Croatian Army should happen by the end of this year if we take into account the smaller budget compared to previous years? Is the purchase of fighter jets on hold until further notice?

– I’ve already answered part of this question. As for the procurement of new multi-role fighter aircrafts, it has not been postponed. The plan was to make a political decision on the purchase of aircrafts immediately after the New Year, but given the devastating earthquakes in Sisak-Moslavačka County, the decision was to postpone the entire process because the Government concentrated its forces and assistance on that county. That doesn’t mean we gave up. Life cycle of our MIG aircrafts expires in 2024, but I deeply hope that we will make the decision this year.

6. You are at the head of the HDZ branch in Vukovar-Syrmia County. There were some “disagreements” in communication with party colleagues. How do you see the current situation in the party in Slavonia and are you ready for the upcoming local elections in May?

The situation in the party is excellent, I would say we’re busy. The members focused all their activities on only one goal – winning the local elections and such an approach can already be seen in the field. When it comes to voter support, HDZ is doing great in the entire county.

I would not say that there were disagreements with colleagues in the party. Actually, it’s a matter of interpretation of events. It is completely natural that some noise in communication channels occurs during work, and it can cause misunderstandings, which are then misinterpreted and incorrectly intoned in public. In such situations, it is important to sit down and agree on how to communicate problems in the future in order to solve them as quickly and as best as possible.

7. When it comes to local elections, how do you estimate the occurrence of so-called independent lists, and how much can this affect HDZ’s final result?

I always point out that all these so-called “independent lists” are actually anything but independent. Behind the individuals on these lists are certain interest lobbies and their goals are after the elections are questionable, especially when we talk about the well-being of the inhabitants of Vukovar-Syrmia County.

The Vukovar-Syrmia County has been known as HDZ’s stronghold for years, and it will remain that way. This was also shown during the last parliamentary elections in which the voters clearly said -yes- to the politics of HDZ and of Prime Minister Andrej Plenković. They recognized the programs and investments, which produced numerous benefits in this area in the mandate of the last Government, and gave the green light to the continuity and continuation of the work of this Government. It is clear to the voters that the only vertical that can bring funds to the County for the continuation of old and launching of new projects, is the Government – Župan – Mayor line. The lists for this election include young, capable people who know how to achieve results and provide the inhabitants of this county with the life they deserve. One of them is the candidate for Župan Damir Dekanić, who, in addition to leading one of the most successful branches of Hrvatske šume enterprise in the country, as the Chief of Andrijaševci Municipality withdrew about HRK 100 million from EU funds in two terms. Voters see and know all that. Therefore, I am sure that the HDZ will register another victory in Vukovar-Syrmia County in this election as well.