Ambassador of Hungary to the Republic of Croatia, His Excellency Mr Csaba Demcsák hosted the official 13th July Zagreb event marking the start of  Hungary’s Visegrád Four (V4) presidency, along with His Excellency, Mr Gordan Grlic Radman, Minister of Foreign and European Affairs and His Excellency Mr Zsolt Németh, Chairman of the Foreign Affairs Committee of the Hungarian National Assembly, as the main guests of the reception. 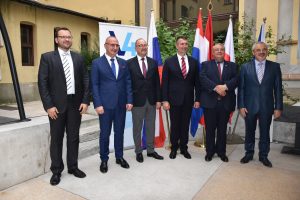 Ambassador Mr Demcsák pointed out that – in line with its motto „Recharging Europe” – the main objective of the Hungarian V4 Presidency is to revitalize Central Europe and the European Union in the aftermath of the COVID crisis.  In this sense, the Hungarian V4 program aims to revitalize the economies and social life of the region. The program, via strengthening our coordination within the EU, also aims to contribute to the stability and safety of our Continent. Hungary’s priorities also include developing cooperation with neighboring partners within the V4+format including Croatia, the Western Balkans and the Eastern neighborhood as well. 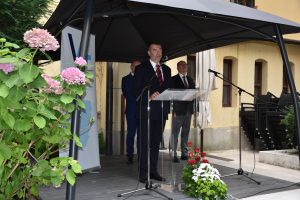 In the words of Mr Zsolt Németh, “recharging Europe for us means building a successful Central-Europe and create a success story for Europe as well.”  His Excellency, Mr Grlic Radman expressed his appreciation that “following Croatia’s EU presidency in 2020, the Hungarian V4 presidency in 2021/2020 continues the same path in rebuilding Europe after COVID.