It was this date, back in 1895, that marked the first day of the Jaruga Hydroelectric Power Plant being commissioned, the day when Šibenik, as one of the first cities in the world, received public lighting on alternate current. 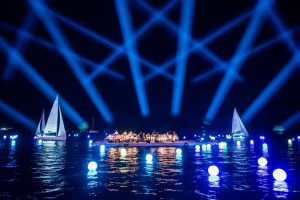 And it happened just two days after one of the most renowned AC power plants, Niagara Falls in the US, was built. However, the residents of Buffalo only started using its electricity a year later, while it came to Šibenik the same evening.

The Jaruga Hydroelectric Power Plant was also the first power plant in the world with a complete closed system for the production, transmission and distribution of AC power. The electricity was first used for public lighting, then for business purposes and production, and only later entered households and was widely accepted by the inhabitants of Šibenik. The credit for hydroelectric power plants with an AC system belongs to Nikola Tesla, who invented the AC system and transmission line, and was built at the initiative of Šibenik Mayor Ante Šupuk, his son Marko and engineer Vjekoslav Meichsner.

Thus, it would be foolish not to exploit this story and fact, not only through tourism, but through the entire branding of the city. Šibenik – a city of light, with its phenomenal fortresses and history, through the play of light and shadow, can be a stage and an art installation.

This is exactly the vision of Zoran Lučić Luca, the author of the project ‘Light is Life’, which, with the support of the Tourist Board of Šibenik and sponsors, is held for the fourth time in Šibenik on August 28.

he light spectacle ‘Light is Life’ marks the day when, more than a hundred years ago, Šibenik, as one of the first cities in the world, received public lighting on alternating current, and the festival celebrates light as a source of life and electricity as a source of light. 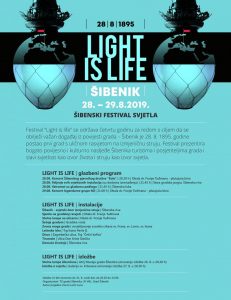 In addition to the basic idea and commitment to ‘Light is life’, renewable energy sources and the rational use of energy potential, this year the theme is family and life in the old town, which is slowly dying out due to modern lifestyles and tourism trends. Thus, light installations are adapted to the theme, and the original motif of this year’s poster was the original 1895 street lamp for public lighting.

This year, as part of the Šibenik event, the city will become an outdoor gallery through various light installations and events that will be spread throughout the city.

Rihelj writes that the “Light is Life” event can be a top event in Croatia and a direction for the future development of Šibenik – not only through tourism, but also through the overall economy.

As the world turns to renewables and ecology, Šibenik can and should rightly lead the story. With two UNESCO monuments, fortresses, Fraust Vrančić, the inventor of the parachute, and the story mentioned above, Šibenik has something to be proud of.

Rihelj adds that the event must receive much more attention and support in order to accelerate its development, since it is a manifestation that makes Šibenik globally recognizable and is certainly a motive for arrivals.

He says that this must be one of the “bright” directions for the future development and branding of the city, as a boutique destination for a unique cultural and historical tourism product for year-round tourism.

In addition, with all strategic preconditions, with strategic and smart development, Šibenik can stand by the side of Dubrovnik.