After the Ambassador’s interview was published in the English language, he contacted us and pointed out that one sentence from his interview had been mistranslated. This time around, we are publishing the correctly translated interview with an apology to the ambassador. 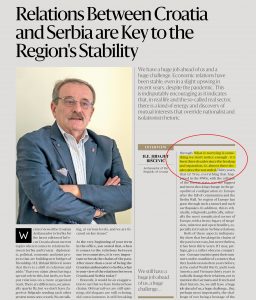 An unintentional technical error made by the translator in the November Serbian issue of  “Croatia InFocus “, published by Diplomacy&Commerce magazine, led to the publication of an erroneous translation. We would hereby like to apologize to the Ambassador of the Republic of Croatia to Serbia, His Excellency Hidajet Biščević, and are publishing the entire interview with the correctly translated sentence. 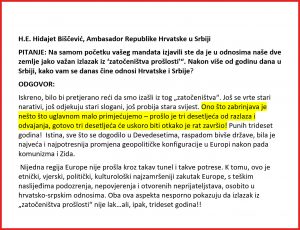 In addition to the interview, we are also publishing a print screen of the original sentence in the Croatian language, from the original interview sent to us by the ambassador.

Diplomacy&Commerce magazine has been cooperating for years with all diplomatic missions in the region: Serbia, Croatia, Austria, Slovenia, Montenegro, and Bosnia and Herzegovina.